Grand Jury indicts Steward in connection to his wife’s murder 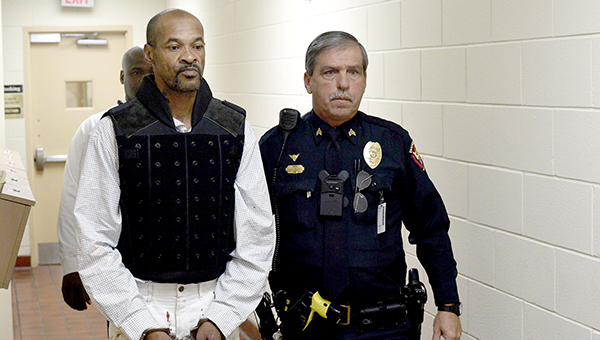 Paul Steward, 51, is led to municipal court in this December file photo for his initial appearance in the murder of his wife, Kacey Latasha Miles Steward. A Warren County grand jury handed down an indictment in the case last week. Steward remains jailed in the Warren County Jail under a $750,000 bond. (Courtland Wells/The Vicksburg Post)

A Vicksburg man had been indicted by a Warren County grand jury on a charge of murder in the December 2018 death of his wife.

Paul Allen Steward, 51, whose address was listed as 124 Hillside Circle, is accused of killing Kacey Latasha Miles Steward, 33, Dec. 24, 2018.  The couple had been married about four years.

Kacey Steward had been reported missing Dec. 25. Her body was found Dec. 27 by police in a wooded area in Warren County.

Steward remains in the Warren County Jail in lieu of $750,000 bond.

Johnson is accused of hiding Justin Tilley and Zachary Brooks at his home. Brooks, 22, and Tilley, 17, were wanted for possession of stolen property involving the theft of a vehicle they wrecked earlier in the month and abandoned.

The pair was later found hiding in linen drawers under beds in the trailer where Johnson lived.

Johnson remains in the Warren County Jail in lieu of $70,000 bond.

• Alton Andre Burden Sr., Jaquan Shonderious Burden, Derrick Darden Jr., and Trayvon Qintis Barnette, 18, 55 Whipperwill Road, were indicted on charges of conspiracy to commit a felony and non-residential burglary in the Oct. 4, 2018, break-ins of Durst Discount Drugs on Clay Street and AM Mart on Wisconsin Avenue.

• Geneva Hicks, 36, 810 Ella St., Tallulah, La.; altering outcome. Hicks, who worked as a dealer at WaterView Casino, is accused in the indictment of using inside information to determine the outcome of a game of chance.