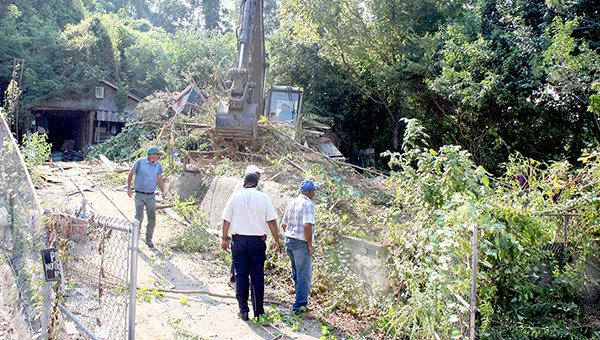 A track hoe for contractor Matthew Scott removes debris after taking down part of a house at 2415 Hunt St. The house will be replaced by a new two-bedroom, two-bath home built through a Home Partnership Grant with Mississippi Home Corp. (John Surratt | The Vicksburg Post)

New homes to replace ones demolished

“This house got so bad, the people living here were living in one room in the front,” she said.

The demolition of homes at 2415 Hunt St. and 2303 Letitia St. is part of an effort to clear the lots and replace the dilapidated houses with new $127,000 two-bedroom, two-bath homes under a $705,000 Home Partnership Grant from the Mississippi Home Corp.

Young said the homeowners are living in other areas while waiting for their new homes.

To participate in the Home Partnership Program, she said, people must be elderly, low income and own and live in the home. They must have clear title to the property and have no debt.

The grant provides funding to raze and build two, two-bedroom, two-bath homes with a value of up to $127,000 per home, and rehabilitate five homes. No match is required by the city. All the property owners have to do is maintain their property and insurance, she said.

“We will be opening bids to rehabilitate three homes at the next board meeting,” Young said.

The city also has a blight elimination grant through Mississippi Home Corp.

Under the blight elimination program, the city will remove selected homes with a clear title.

The blight partner, a nonprofit corporation, buys the dilapidated property and builds the new home on the site after the old building is removed. The new home is then sold to a new owner.

Vicksburg is the first city in the state to implement the blight grant.

Just days after a Warren County grand jury handed down an indictment on a December 2018 murder, the Vicksburg Police... read more