‘A Donkey’s Dream’ came from loneliness and God’s urging 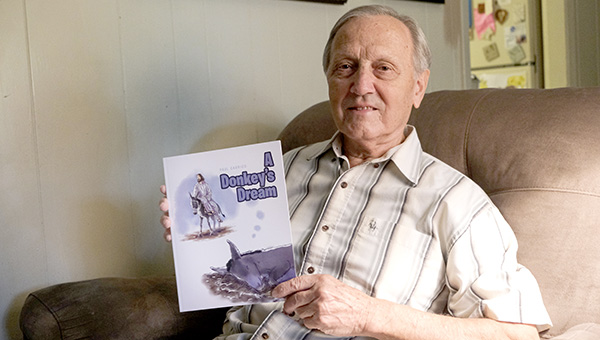 Paul Carrico poses for a photo with his book ‘A Donkey’s Dream.’ (Courtland Wells/The Vicksburg Post)

Sometimes the most unexpected things happen in life.

For Paul Carrico, it was writing a book.

Never before had the Vicksburg resident thought about becoming an author.

In fact, Carrico claims he couldn’t even write a decent letter home to his mother when he was serving overseas in the U.S. Army.

But that all changed one lonely night in February, four months after his wife had passed away.

“It was just me and my dog, at the house. It was the cold wintertime, and I was trying to get to sleep at night. I would stay up late and watch the late news and then go lay down in the bed, but then when I would try to go to sleep this thought would come into my mind,” Carrico said. “This went on for about three or four days, so finally at midnight, I just sat up in the bed and hollered out, ‘O.K. I’ll write it down.’”

What Carrico wrote down was the start of his book, “A Donkey’s Dream,” a children’s story about the donkey that carried Jesus into Jerusalem.

“A Donkey’s Dream” begins with Junior, a little donkey, who along with his mother and aunt, is tied to a post in wait of someone needing to rent a pack animal.

The two grown animals are rented daily, leaving poor Junior alone and curious about the world outside the stable.

One night, however, in Carrico’s story, Junior has a dream, which comes true the following day.

While writing the story, Carrico said, he became so emotional at one point he just had to stop.

“When I reached the part in my story where Jesus was trying to get the donkey away from the hostile crowd, I had to stop. I was so emotionally attached to him (the donkey), I had to stop and wipe the tears out of my eyes before I could continue on,” he said.

Carrico said he first shared his story with a neighbor and his son, who lives in Nashville, who hoped someone in the city would be interested in the story. Unfortunately, they could not find anyone interested.

Five years passed, and nothing became of “A Donkey’s Dream.”

Carrico had almost given up hope, he said, but then recalled the scriptures in the Book of Matthew that talk about a man’s gifts.

“I remembered about the parable where Jesus told about the one man getting five talents, one getting two (talents) and one getting one (talent),” he said. “So I thought I was going to be that one with one talent, and decided to do something.”

After seeing an advertisement on TV from a Christian publishing agency, Christian Faith Publishing, Carrico said he decided to send his book off.

“I just prayed and said, ‘Holy Spirit you gave it to me, if it’s to be anything it’s yours to do with,’” he said.

After contacting the company, he received word back, saying they were interested. With their help and partnership, Carrico’s book was published. He received his first copies of “A Donkey’s Dream” in February.

“The book came out of complete loneliness and the Holy Spirit working on my mind,” Carrico said. “And as I did then, I give the Holy Spirit total credit, because I would have never even come close to doing anything like this. He just let me write it down.”

Carrico will be signing copies of his book at the Old Courthouse Flea Market, which is scheduled for Saturday, Oct. 5.