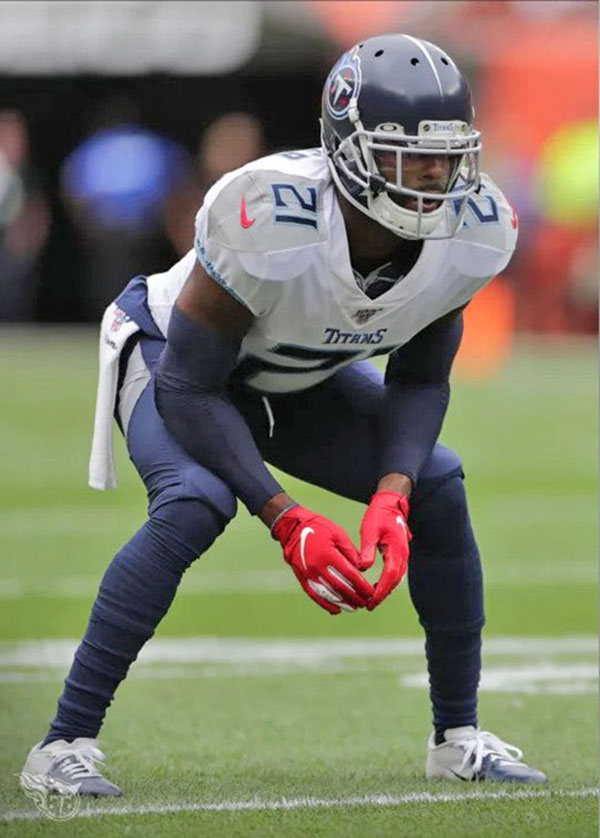 Tennessee Titans cornerback Malcolm Butler, a former Vicksburg High star, lines up for a play during the 2019 season. (Courtesy of the Tennessee Titans)

You’re in Four Down Territory. Each week during football season we’ll highlight four notes, nuggets or stats from the weekend that was in Mississippi high school football, college football and the NFL.

1
It didn’t take long for Malcolm Butler to continue a personal streak and help the Tennessee Titans make a big splash.

Butler returned an interception 38 yards for a touchdown in the fourth quarter Sunday as the Titans beat the Cleveland Browns 43-13 on opening day in the NFL.

Butler’s interception was the 12th of his career, and the second one the former Vicksburg High star has taken back for a touchdown. It gave him at least one interception, including the playoffs, in each of his six seasons in the league.

Butler did not have an interception in his rookie season of 2014, but did famously have one in the final minute of Super Bowl XLIX to secure the New England Patriots’ 28-24 win over Seattle.

Butler’s interception this time put the finishing touches on a lopsided win over a Browns team many pundits have picked to win the AFC North. Butler and the rest of the Titans seemed satisfied with putting that talk on ice for at least a week whilemaking their own statement as a contender in the AFC South.

“You can look good on paper, but it has to match up when you get on that grass,” Butler told TitansOnline.com after Sunday’s game. “We stuck together and won as a team today.”

2
For the past year, Porter’s Chapel Academy has not had much to celebrate. Not only did it lose 10 games in a row, it had been outscored by an average of 33 points during the streak.

That all ended Friday, when the Eagles notched their first win in 371 days by beating Claiborne Academy 32-22.

PCA scored 20 unanswered points in the last seven minutes to erase a 10-point deficit, and showed both some grit and explosiveness on both sides of the ball.

Quarterback Luke Yocum threw two long touchdown passes to Michael Tod Andrews, while Tyler Washington ran for 120 yards and two TDs. The 32 points were more than the Eagles had scored in their first three games combined, and their 320 yards of offense were a season high.

On defense, John Michael Wilkerson had eight tackles, three sacks and one forced fumble. His sack and forced fumble in the final minute sealed the game when Kainen Powell returned it 62 yards for a touchdown.

Besides the great individual efforts, the Eagles caught some big breaks. Claiborne was penalized for roughing the kicker when PCA punted out of its own end zone, and again for pass interference later in the drive. Yocum and Andrews hooked up for a 47-yard touchdown on the next play after the interference call to cut it to 22-18 with seven minutes left.

“We caught some breaks the other night that we have not caught in years. The ball just bounced our way,” PCA coach Blake Purvis said. “I always felt if we had the opportunity to be in a position to get it done at the end of the game, we’d get it done. And we did. That definitely helps when you’re talking Monday through Thursday in practice, and even Friday if you’re down. If you stick with it, good things are going to happen. There is some light there, and you can find success from that.”

Although the win wasn’t much to brag about, running back Cam Akers had a performance to remember.

“Whatever I got to do to help this team win,” Akers said in a postgame press conference. “Forty, 50, 60 (carries). You got to be quick on your feet, react. And make the most of it.”

Akers became the 16th Florida State back to eclipse 2,000 career rushing yards and now has 2,039. On Saturday, he had his seventh career 100-yard game and was six yards shy of a career-high, which was 199 yards in a victory over Syracuse in 2017.

Akers ranks fifth in the country this season with 310 rushing yards and has accounted for nearly 40 percent of Florida State’s total yardage so far.

4
Former Mississippi State star Dak Prescott led the Dallas Cowboys to a 35-17 rout of the New York Giants on Sunday, and made history doing it.

Prescott became the fourth NFL quarterback to register a perfect 158.3 passer rating in a game with at least 30 pass attempts. Prescott was 25-of-32 for 405 yards, with four TDs and no interceptions. It was also the second 400-yard game of Prescott’s career.

The other quarterbacks to achieve a perfect passer rating were the Los Angeles Rams’ Jared Goff in 2018, the Rams’ Kurt Warner in 2000, and the New York Jets’ Ken O’Brien in 1986.