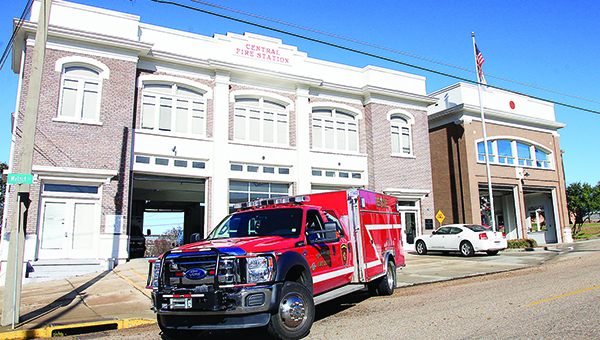 The Board of Mayor and Aldermen Monday accepted a bid from Fordice Construction to replace the windows in the Vicksburg Fire Department’s Central Fire Station. (File Photo)

Vicksburg’s Central Fire Station will be getting new windows.

The Board of Mayor and Aldermen Monday accepted a bid from Fordice Construction to replace the windows in the 95-year-old building on Walnut Street, but Mayor George Flaggs Jr. believes some of the interior work on the building could be done in-house.

Fordice, the only bidder on the project, submitted a base bid of $328,800 to replace the windows and three alternate bids for work on the building’s interior: $33,300 to repair water damage to interior walls; $24,000 to paint the walls after the repairs; and $21,150 paint the windows.

The board in June rejected bids from Fordice and the Arcon Group of Madison because both were more than the $350,000 budget for the project and decided to re-advertise. Acron’s base bid was $392,700.

Russ Markle with Wier Boerner Allin, the project architects, said the difference in Fordice’s second bid was because some of the scope of the work was removed from the base bid and shifted to the alternates.

He said the architects were able to get aluminum frame replacement windows approved by the Mississippi Department of Archives and History, reducing the replacement cost.

The Central Fire Station is listed as a historic landmark because it is part of the city’s Downtown Historic District, and replacement materials must meet state Archives and History approval.

Flaggs said he agreed with the bid to replace the windows, but believed some of the other interior work could be done in-house.

He said he wanted the committee he appointed in June to review the renovations and repairs to the fire station to look at the alternative bids.

“They’re (Fordice) is going to do the base bid,” he said. “The three options are up to them (the committee) to decide. Out of those three options, I would recommend that we do the painting in-house.

“I’ve got a concern about (paying) $24,000 for painting when we’ve got someone that can do it,” he said. “Anything that we can do in-house, I recommend we do it; it’s a cost savings to the city. The savings ought to come on the options.”