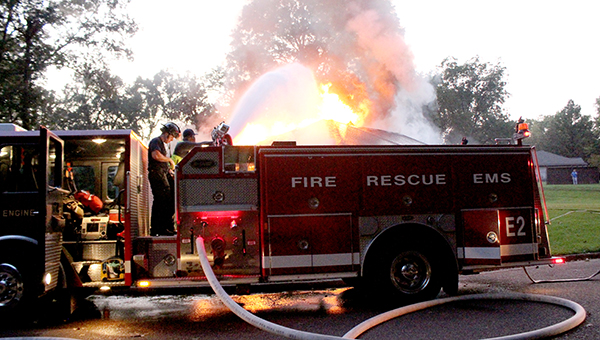 Vicksburg firefighters use a water cannon on Engine 2 in an attempt to extinguish flames breaking through the roof of a home at 3308 Raintree Road off Porters Chapel Road Tuesday evening. (John Surratt | The Vicksburg Post)

An electrical problem in the attic was the cause of a Tuesday evening fire that destroyed a home at 3308 Raintree Road off Porters Chapel Road.

Vicksburg Fire Chief Craig Danczyk said Vicksburg Department and Mississippi Fire Marshal’s investigators found the fire began in the attic of the house around the fireplace.

“We had numerous (circuit) breakers tripped in the box and we had beading on the wires in that area of origin around the fireplace,” he said. “Everything at this time is pointing to electrical.”

Danczyk said no one was injured and the home was insured.

He said the homeowner’s son was at home when the fire began about 7:03 p.m.

“He was in his bedroom in the front of the house watching TV. He heard something and went to the living room area around the fireplace, and he noticed fire on the back wall. That’s when he exited the home. 911 was already called by a neighbor.

Danczyk, who lives in the area, was the first firefighter at the scene and saw heavy smoke and flames.

“The attic space is not going to have Sheetrock and some of those fire retardant materials that living space will have,” he said. “In the event we have fire in an attic, you’re going to have heat transfer and (the) fire spread will be more rapid, and that’s what I believe happened in this case.”

“It just seemed the fire was just stubborn and they just had trouble extinguishing it quickly,” he said.