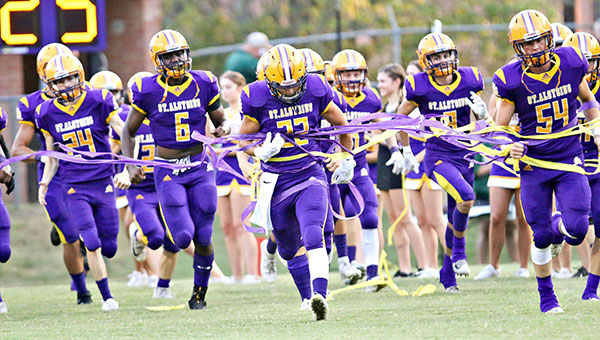 St. Aloysius football players run onto the field before last week’s game against Central Hinds. The Flashes will travel to McComb on Friday to play Parklane Academy. (Walter Frazier/For The Vicksburg Post)

This week doesn’t mark the start of the most difficult part of St. Aloysius’ schedule. That is still a couple of weeks down the road. It is, however, a harbinger of things to come.

The Flashes (2-1) go on the road to McComb on Friday night to take on MAIS Class 6A foe Parklane Academy (2-1). It’s a step up not just in class, but in quality of opponent, and a major challenge St. Al will need to overcome before a key three-game stretch of district games begins in two weeks.

St. Al has done well with that game plan the past two weeks. It has rushed for 578 yards in wins over Greenville Christian and Central Hinds to achieve its first winning record at this point in the season since 2014. Just as importantly, the Flashes have only committed three turnovers in the past two games after giving it away four times in a season-opening loss to Hartfield Academy.

Running back Alvin Brown and quarterback Phillip Upshaw have combined for 598 of the Flashes’ 643 rushing yards this season, as well as four touchdowns. St. Al, as a team, is only 5-for-16 passing for 54 yards.

With the improved play has come a renewed sense of confidence. St. Al had gone four years without winning a game in August, and then ended that streak by knocking off Greenville Christian. The victory over Central Hinds created a winning streak. Now they’ll try to add to it while simultaneously not getting too far ahead of themselves.

“We keep them pretty level-headed, and we’re going to take it one game at a time. We know we’ve got work to do if we want to be a champion,” Fields said. “They trust the process more and in you when they see the benefits of the work they’ve been putting in. This is going to be a bigger test this week.”