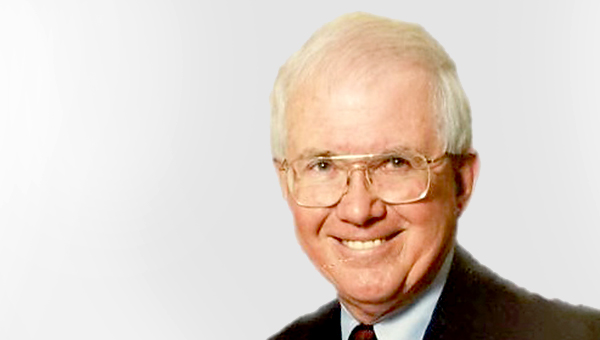 “He was the consummate gentleman.”

Brabston, a Vicksburg native, died Sept. 6. in Ridgeland. He was 86.

“He was a great guy,” Biedenhard said. “I knew him through St. Alban’s and at our Rotary Club in Vicksburg. Just over the top a nice guy. He was always fun to visit with. He had a lot of history on St. Alban’s, Bovina, the area where I grew up.”

A graduate of St. Aloysius High School, Brabston served in the U.S. Army and was a member of the U.S. Army Security Agency and ASA Korea.

After serving in Korea, he enrolled in Mississippi State University and graduated with honors with a Bachelor of Science in civil engineering, and went to work for ExxonMobil Corp., starting in Baton Rouge, La.

He held positions in sales and marketing in Chicago, Ill., and New York, N.Y., before returning to Baton Rouge, where he ended his career as the ExxonMobil Baton Rouge refinery’s public affairs manager.

On Nov. 11, 1965, Brabston survived a major crash of United Airlines flight 227 from Denver, Colo., to Salt Lake City, Utah. Of the 91 people on board the plane, 43 died, including 2 passengers who succumbed in the hospital several days after the accident. The 48 survivors included all crewmembers.

Brabston was credited with going back into the airplane several times pulling people to safety.

When Brabston retired, he returned to the Vicksburg area, moving to Linden Plantation, which was originally owned by John Wesley Vick and Brabston’s great aunt, Anne Marie Brabston.

A new home was built on the original house site in the 1990s, the house and gardens were opened to the public for tours, and a small cabin was used as a bed and breakfast venue.

Brabston was involved in civic activities in Vicksburg, serving as president of the Vicksburg Rotary Club and president of the board and campaign chairman of United Way of West Central Mississippi. He was also a lifetime member of the Public Relations Association of Mississippi

“He was too generous with his resources, and as a young professional starting out in the nonprofit sector, he was tough on me at times on decisions I had to make, but he was encouraging, also, and he let me know that I had his support when I had to make tough decisions,” said Barbara Tolliver, who was United Way director when Brabston was board president.

“He was a gentleman, a family man, a community advocate and had a love for people. We developed a friendship. He was a mentor and he encouraged me to do my best.

“He believed those of us who were stronger, we needed to help those who were not, and he believed United Way was the entity to do that.”

Ken Hicks, who met Brabston through United Way, called him a problem solver.

“He figured out what we needed to do to raise more money for United Way, and he put a plan in and he made it fun for all of us,” he said. “I considered him a very accomplished business person for sure. He had a knack for solving problems and making them not be a problem.

“He made things fun. What would be work to me, he converted to fun projects. I was just thrilled to be involved with him because I knew we would be successful.”

Services for Brabston are 11 a.m. Saturday at St. Alban’s Episcopal Church in Bovina. Visitation will be at the church from 10 a.m. until the service.