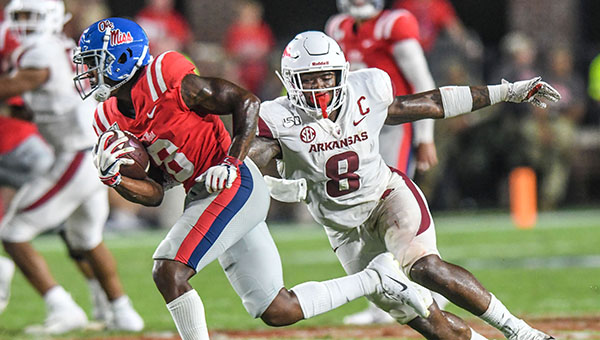 OXFORD (AP) — The chemistry between Ole Miss quarterback Matt Corral and receiver Elijah Moore has been building since last season.

Now that both have more featured roles in the Rebels’ offense this year, Moore is poised to have a breakout year.

This year, the speedy sophomore is tasked with filling the void that trio of receivers left behind. Moore responded last week by catching seven passes for 130 yards and two touchdowns in a 31-17 victory over Arkansas.

“He made some big plays,” Ole Miss coach Matt Luke said. “On the biggest play of the game he beat his man on Cover One and took it to the end zone. He’s just a sophomore. And he’s one of the leaders. He’ll continue to get better and move into the leadership role.”

After Brown, Metcalf and Lodge left the program, Moore knew he’d have to assume a leadership role. He doesn’t mind the burden and feels as if it is simply part of his job as a football player.

“I know I am going to have a big role in this offense,” Moore said. “I feel like we did what we were supposed to do.”

That was particularly true at a critical stage of the Arkansas game.

Ole Miss led 17-3 in the fourth quarter when tight end Octavious Cooley fumbled an impromptu pitch from Corral. Arkasnas’ Kamren Curl scooped up the loose football and ran it back 73 yards for a touchdown that trimmed the margin to 17-10.

The Rebels answered with a 46-yard touchdown reception by Moore, who beat his man and blew by the remaining pursuing defenders.

“We’ve done a good job of staying on the same page,” Corral said. “I cannot stress that enough. He stepped up.”

As a young receiving corps tries to find its collective identity and younger players emerge into bigger roles, Moore’s leadership and production is invaluable for an offense still trying to find its footing.

Moore’s speed makes him a matchup issue for most defenses in the slot. His hands and footwork make him a trustworthy target for a young quarterback.

“He is the most dynamic receiver we have,” offensive coordinator Rich Rodriguez said. “From week one to week two, you can see the improvement he made. I think that will continue. He will keep getting better.”