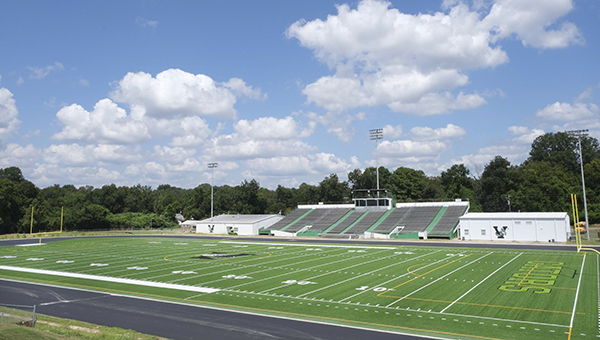 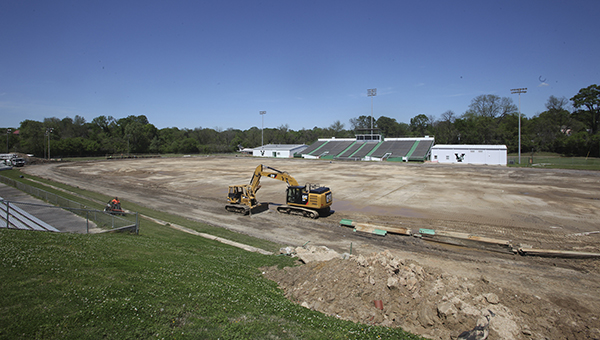 Crews work on the field at Memorial Stadium during the early stages of renovations in April. The first phase of the project involved installation of an artificial turf playing surface. (Courtland Wells/The Vicksburg Post) 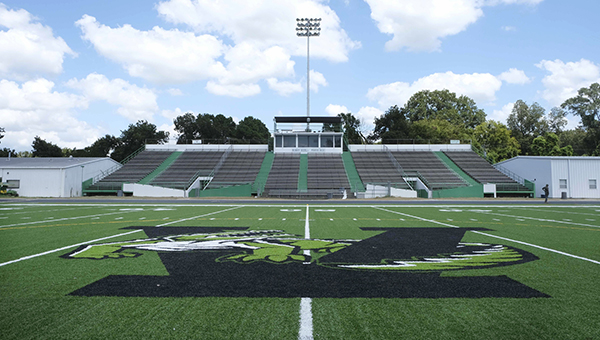 For the past six weeks, football practice at Vicksburg High School has been an arduous daily routine.

Construction to Memorial Stadium and the adjacent baseball field — which includes the football practice field — has displaced the team. So each day, after an hour or so of weight lifting or film study in the fieldhouse, everyone packs up and heads across town to Vicksburg Junior High.

Players get dressed and load onto a bus. Coaches stuff equipment into their personal vehicles. The bus returns to VHS and picks up a second wave of players. When practice is over several hours later, they repeat the commute.

“If you’re out of the weight room at 4, it’s 5 o’clock before you’re starting practice,” Vicksburg head coach Tim Hughes said. “On Monday or Tuesday we have a 150-minute practice schedule and we still have that same 45-minute process to get back. It’s 8:15 when we’re getting kids home.”

Finally, there is light at the end of the tunnel.

The new artificial turf surface at Memorial Stadium is finished at last, and the Gators’ days of commuting for practice are winding down. The school’s homecoming celebration isn’t until mid-October, but this Friday it will celebrate a homecoming of a different sort with its football home opener against Benton (La.).

“Hopefully now with us being able to get on our field, there’s some normalcy there. Luckily, we did what we needed to do — and above and beyond — in the offseason. We’ve gotten a lot of football in over the year,” Hughes said. “It’s very encouraging. It’ll be new for everybody. We’ll have to get used to everything. But at least now we can get used to what it’s going to be like from here on out. We can get a routine set up. And once we get a routine set up, some instruction and development can start happening again.”

The Gators have had some ups and downs during a 1-2 start. They’ve suffered blowout losses to Class 6A opponents Madison Central and Warren Central, sandwiched around a win over Velma Jackson.

While any number of factors contributed to the two losses, Hughes said a big one was the upheaval caused by the construction. The hour it takes to transport the entire operation from the high school to the junior high, he said, makes it hard to transition from one segment of practice to another with any flow.

With only a sliver of the normal practice field and limited equipment available, he added, the types of drills they can do are also affected.

“When you watch film and see us, our back is not very flat when we’re driving off the line. How much have we driven the sled? We don’t have a sled over there,” Hughes said. “If you want somebody peeling off the ball, putting a facemask in somebody and driving somebody backward, we have to get some repetition at that.”

Hughes was quick to add that everyone is taking the situation in stride, even if it has been mentally and physically draining.

“I’m not faulting anybody. It’s not an excuse for anything, either,” Hughes said. “It’s a wearing and tearing. We’re three weeks in. We’ve had some success, we’ve had some decent times in games where we haven’t had success. I feel like we’re seven or eight weeks in, just my body. And that’s me as a coach. That’s not what these kids have to be feeling from having that long of a day, every day.”

While installation of the turf is complete and Friday night’s game will be played as scheduled, Memorial Stadium is still not quite a finished product. Some areas, such as the open boundary between the football and baseball fields that includes a steep drop off, will be cordoned off for safety reasons. Construction equipment and materials were still being moved and cleaned up this week.

“We’ll have plenty of eyes and ears out there as it relates to security and police for the people parking along the street,” Nailor said.

The product on the field is also a work in progress. The Gators are coming off a disappointing 42-7 loss to archrival Warren Central in which they committed four turnovers and gave up 28 unanswered points in the last 2 ½ quarters.

They’ll have to turn it around against a solid Benton team that beat Oak Grove (La.) 33-21 in its opener last week. Benton is a Louisiana Class 5A team that has gone 50-14 since the start of the 2014 season.

Shaking off last week’s loss, Hughes said, will be a big key to beating a quality opponent and heading into a bye week and then the start of Region 2-5A play on a positive note.

ONLINE:
For live scoring updates and full game coverage on Friday night, follow us at vicksburgpost.com, facebook.com/thevicksburgpost, and twitter.com/vixpostsports