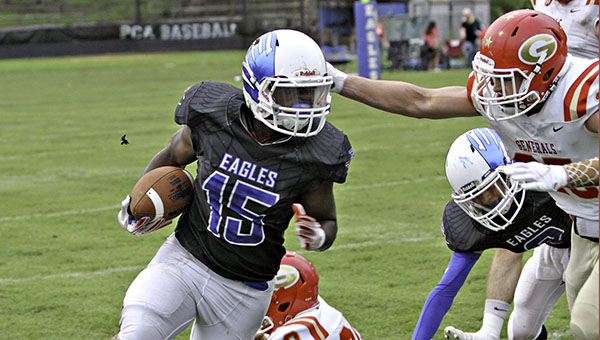 When Porter’s Chapel Academy showed up for football practice on Monday, the sun was shining a little brighter, the birds were singing a little prettier, and life was a little better all around.

Winning has a tendency to do that.

The Eagles snapped a 10-game losing streak, and earned their first win this season, by beating Claiborne Academy 32-22 last week. Now they’ll try to cook up a winning streak when they head to Baton Rouge to face CHEF Friday night at 7.

“It was definitely a welcome sight. Not a surprise sight, since we’ve had good effort all year. I don’t know if it was the Week Zero game or what, but it’s taken a little longer to get the pieces in place and find success,” PCA coach Blake Purvis said. “It’s huge going into a bye week (next week), especially. If we can pick up another win and get some momentum going, and get healed and rested during that bye week, it will propel our practices to be as efficient and effective as possible.”

CHEF is an acronym for Christian Home Educators Fellowship, a Baton Rouge-based home school outfit. It won three consecutive Louisiana home school state championships from 2013-15, but has gone 4-14 over the past two-plus seasons.

The teams have played once before, in September 2014. CHEF came to Vicksburg and beat PCA 22-21.

Although it plays in its own league separate even from other Louisiana high schools, CHEF (0-2) has played a number of teams in the Mississippi Association of Independent Schools over the years. Earlier this season it played Clinton Christian and lost 54-8.

Even with some common ties, Purvis said scouting a team like CHEF is a challenge.

“It makes it more difficult. You don’t have as many common opponents. We’re fortunate that they played Clinton Christian, which is a team we scrimmaged before the season,” Purvis said. “Your usual plan of calling coaches you know doesn’t work as well. You don’t have as many people that have seen them year-to-year, so you don’t know what they’ve got coming back. It does create a little bit of a challenge.”

This is the second of four long road trips in a five-game span for PCA. Purvis said the team’s fans traveled well last week and credited them with helping the Eagles rally from a 10-point deficit in the fourth quarter to beat Claiborne. Approximately 100 fans made the three-hour drive to Haynesville, La., and Purvis is hoping they load up for another long ride this week.

“Our fans were outstanding. I really believe they made a difference the whole game,” Purvis said.

Another challenge for PCA (1-3) this week is switching back to 11-man football after a pair of 8-man games the past two weeks. The Eagles had a difficult time in the first one, losing 52-22 to Deer Creek, but found their footing against Claiborne.

Not only did PCA rally from 10 points down in the fourth quarter to win, it had one of its best offensive games in the past two years. Quarterback Luke Yocum completed 5 of 8 passes for 182 yards and two touchdowns — covering 75 and 47 yards, both to Michael Tod Andrews — and running back Tyler Washington rushed for 120 yards and two touchdowns.

Purvis said going back to 11-man, even after only a two-week break, will require some adjustments. In the long run, though, he said the 8-man experience will have some lasting benefits.

“We’re going to have to get a lot of reps this week. We were fortunate in two weeks of 8-man that we were able to carry over a lot of stuff that we do. We’ll have to adjust some of our blocking schemes this week to account for the extra people, but we’ll be OK,” Purvis said. “I’m hoping the 8-man helped our defense by learning how to play in space and secure tackles.”

More than anything, Purvis said, the victory last week brought some desperately-needed confidence back to a struggling team.

“Any time you feel like you figure something out, you hate to have a change,” Purvis said. “But success is success. It doesn’t matter where it comes from or how many people are on the field. Blocking is blocking and tackling is tackling. If you’re doing those things it should translate to either game.”