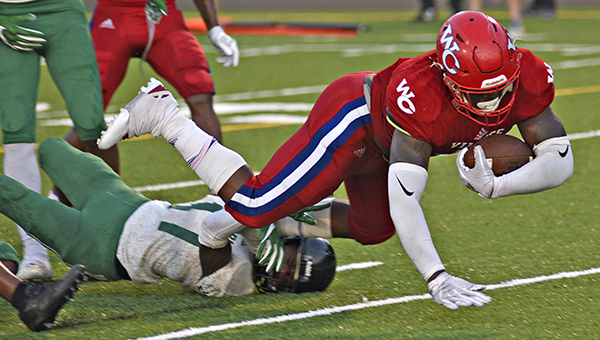 Warren Central's Malik Sims (7) dives across the goal line for a touchdown against Vicksburg High last week. The Vikings will go on the road Friday to play No. 3 Brandon. (Courtland Wells/The Vicksburg Post)

The latest Mississippi Associated Press Class 6A football poll has Madison Central, Pearl, Brandon, South Panola and Starkville comprising the top five. At a glance, it could easily be mistaken for Warren Central’s 2019 schedule.

The Vikings will play all of those teams this season. Up next on the list is a road trip to No. 3 Brandon on Friday night, in the final game before the Region 2-6A schedule begins in two weeks.

“We’re thinking of us first,” Warren Central coach Josh Morgan said when asked about the difficult schedule. “We’re trying to get better and focus on the mistakes we’ve made. As far as opponents go, it’s another big opportunity to get better. It’s a challenge. It’s a true grind. But, again, it’s going to make us better. It’s mentally getting us ready to go every week that makes you lock in.”

Warren Central’s first go at a top-five team did not end well. It was routed 42-0 by Pearl two weeks ago for the program’s first loss by 40 points or more since 2010.

The Vikings (2-1) rebounded nicely last week by beating Vicksburg 42-7, but Morgan admitted they are still looking for consistency. In their two wins, the Vikings are plus-5 on turnovers, averaging 212 rushing yards per game, and outscored their opponents 55-7. In the loss to No. 2 Pearl they were outscored 42-0, committed three turnovers, and had 208 yards of total offense.

Jerrious Stovall has rushed for 185 yards and two touchdowns to lead the running game, but 10 different players have at least one rushing attempt this season.

Quarterback Parker Kivett is 25-of-35 passing for 274 yards.

They’ve certainly got a good opponent this week. One of the best in Mississippi, in fact.

Brandon (2-1) opened the season by beating No. 5 Starkville and spent a week at No. 1 in the polls before losing to current No. 1 Madison Central. The Bulldogs rebounded to beat Clinton 27-14 last week.

Senior quarterback Will Rogers has already thrown for 615 yards and four touchdowns in three games against that stiff competition, and 10 different receivers have caught a pass.

Rogers threw for 3,009 yards and 23 touchdowns last season, when the Bulldogs finished 13-2 and reached the Class 6A semifinals. They have won at least 10 games in six of the past seven seasons.

“They’re good,” Morgan said. “They’ve got a senior group and they’re very aggressive and disruptive defensively. Offensively, you’ve got one of the top quarterbacks in the state, if not the top, and receivers all around him. It’s all types of different challenges.”

Brandon is one of the few large Jackson Metro area schools Warren Central has not often crossed paths with over the years. They played 12 times in 15 years from 1977-92, but this will only be the second meeting between them since then. The other was in the 2012 Red Carpet Bowl, which Brandon won 44-21.

Despite that, the Vikings and Bulldogs are not really strangers. They played each other in their spring game four years in a row from 2015-18, in games that were played under regulation rules and often had the intensity of a regular-season matchup.

MHSAA realignment and the need to switch up non-region opponents ended the spring arrangement, but Morgan and Brandon coach Tyler Peterson decided to keep the series going in the regular season.

“We’re not just pretty familiar with each other through all of those spring games and meetings,” Morgan said with a chuckle.