Gators rally from 21 down, but lose in overtime to Benton 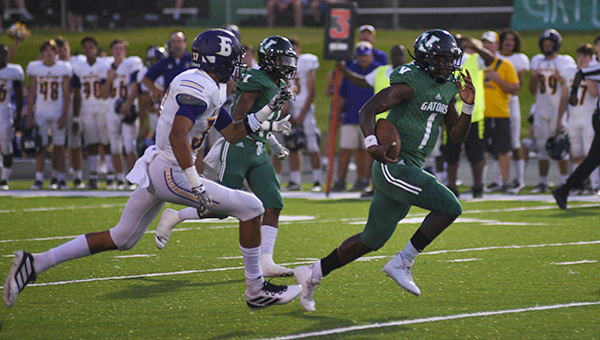 The Gators did everything they needed to do to win — except finish it off.

Holder Rashad Flagg couldn’t handle a low PAT snap in overtime and was swarmed under by a pack of Benton defenders, as the Tigers escaped with a 49-48 victory at Memorial Stadium.

Vicksburg erased a 21-point deficit in the last 9:37 of the fourth quarter and then scored again after Benton found the end zone to start overtime. It just couldn’t come up with the one last play to turn a memorable comeback into a memorable victory.

“It just gives you that sense of what we’re out here for. That’s what I’m proud of. We spend a lot of hard time with these guys, and there’s a lot of times that we’ve got to look deep inside ourselves and say, ‘What are we out here for?’ We’re out here for that betterment. It’s the first time in a long time that we decided to say, ‘Let’s go see how good we can be,’” Vicksburg coach Tim Hughes said. “That’s a team that was 50-something and 14 in their existence. They don’t know how to lose. We almost showed them how to lose. That only comes from people saying, ‘I’m not going to be satisfied with what people tell me it’s like. I’m going to go make that change and be the best version of myself, and see how good we can be.”

Vicksburg trailed 42-21 with 9:37 left in the fourth quarter, after Benton quarterback Cade Stewart threw the last of five touchdown passes. Stewart finished 16-of-30 for 186 yards.

The Gators had twice gotten a two-score deficit down to one, however, and went to work on their next possession. Ragan capped a 10-play drive with a 14-yard touchdown run, and the defense forced a punt with 4:23 remaining.

Two plays later, Ragan eluded several defenders in the pocket and heaved the ball downfield for Chris Henderson, who caught it and zipped past two more defensive backs for a 67-yard touchdown to trim it to 42-35.

Another punt by Benton gave Vicksburg the ball back with 2:44 to go, and Ragan worked some more magic. On fourth-and-12 from the Benton 38 with under 30 seconds left, Ragan looked to pass. Not seeing any open receivers, he escaped the pressure and ran for the first down marker. He got through a wave of defenders and ran up the sideline for a touchdown with 15 seconds to go, and Chris Williams added the PAT to make it 42-all.

Ragan finished the game 15-of-28 passing for 184 yards and two touchdowns, with no interceptions. He also ran for 158 yards and three TDs. The senior either ran with the football or threw it on Vicksburg’s last 20 offensive plays.

“I can’t tell you about some of the beautiful passes he made. All I can tell you is there was no time, on no play, where he was saying this just ain’t me. If it was bad, ugly, whatever it is, he showed so much for us to follow behind and just to be a spark,” Hughes said.

Benton got the ball first in overtime — teams alternate possessions starting at the opponent’s 10-yard line — and Stewart squeaked across the goal line on fourth-and-goal from the 2. The PAT made it 49-42.

Ragan started Vicksburg’s possession with a 7-yard pass to Henderson, and on the next play Zyon Scott punched it in for a 3-yard touchdown and a 49-48 score.

The PAT snap was low, however, and Flagg couldn’t get it down cleanly for Williams to kick it. Flagg picked it up and ran, trying desperately to make a play, but was tackled near the 15-yard line to end the game.

Hughes said he considered going for a game-winning two-point conversion at both the end of regulation and overtime, but felt the Gators had the momentum to win it.

“You consider it. The normal doesn’t tell you to do that. The normal says let’s keep playing and competing. Usually that option is an, ‘I don’t know if we can do this again’ option. I felt like we could do this again,” Hughes said. “I felt like it was something we could have kept doing this all night long. We could have kept competing as long as we needed to. That was the option in going for the kick.”