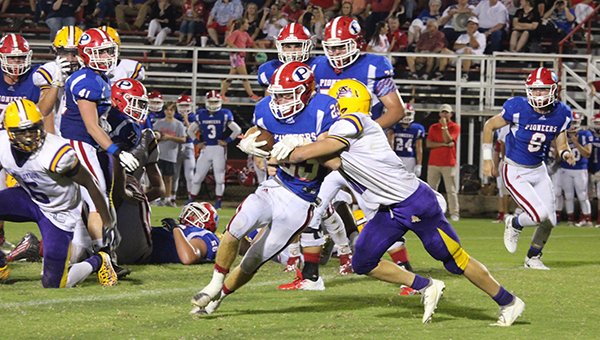 St. Al (2-2) had won for the first time in the first four weeks of the season since joining the Mississippi Association of Independent schools in 2015 by beating Greenville Christian and Central Hinds the past two weeks. Class 6A Parklane was a different sort of beast, however.

St. Al got on the board with an 18-yard touchdown pass from Phillip Upshaw to Kieran Theriot early in the fourth quarter, but Parklane answered with a 25-yard TD run by Alford midway through to end any thoughts of a comeback.

Parklane’s Ben McGregor closed out the scoring with a 5-yard run. Parklane only threw two passes in the game and ran it 61 times.

Upshaw finished 12-of-23 passing for 112 yards, with one touchdown and one interception for St. Al. Alvin Brown led the Flashes in rushing, with 52 yards on eight carries. St. Al only had 162 yards of total offense compared to 407 for Parklane.

Theriot caught three passes for 47 yards and a touchdown, and also had seven tackles on defense.

Braden Kapp scored PCA’s only touchdown, on a 5-yard run.

The Eagles also sustained another loss as starting quarterback Luke Yocum left the game with a shoulder injury. PCA has a bye next week, and his status for the team’s next game in two weeks against Centreville Academy was not immediately known.