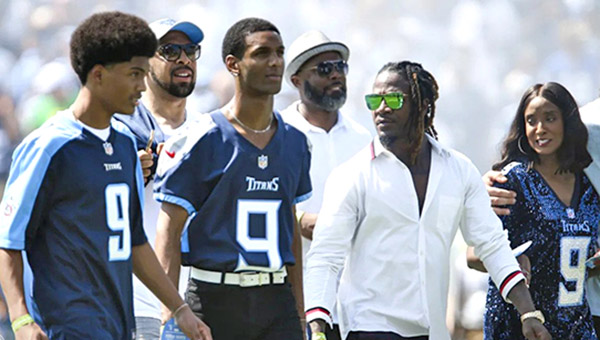 The family of the late Steve McNair walks onto the field before Sunday’s game between the Tennessee Titans and Indianapolis Colts. The Titans retired the No. 9 jersey of their longtime quarterback and former Alcorn State star. (Donald Page/The Tennessee Titans)

LORMAN — Alcorn State University announced Monday that it will officially retire the No. 9 jersey worn by former quarterback Steve McNair later this season.

Alcorn will retire the jersey at a ceremony during its home football game on Oct. 26 against Southern University.

The festivities during the game will be part of a larger three-day celebration honoring McNair. A fundraising gala will be held at 7 p.m. on Thursday, Oct. 24, at the B.B. Club in Vicksburg. The event will be hosted by McNair’s Tennessee Titans teammate Eddie George, and will benefit the Steve “Air II” and Mechelle McNair Endowment that will support academic and athletic endeavors for deserving students at Alcorn.

Details on the gala and other events during the weekend will be released soon, a university press release said.

McNair set career records in the Football Championship Subdivision with 14,496 passing yards and 16,823 total yards from 1992-94. He finished third in the 1994 Heisman Trophy voting.

McNair was the No. 3 overall pick in the 1995 NFL draft by the Houston Oilers — who moved to Tennessee and became the Titans two years later.

McNair led the Titans to Super Bowl XXXIV in 1999 and played 11 seasons with the team and then two more with the Baltimore Ravens.

On Sunday, the Titans retired the No. 9 jersey of McNair and No. 27 of George in a ceremony before their home opener against Indianapolis.