Community comes together to honor Thor, mourn his loss 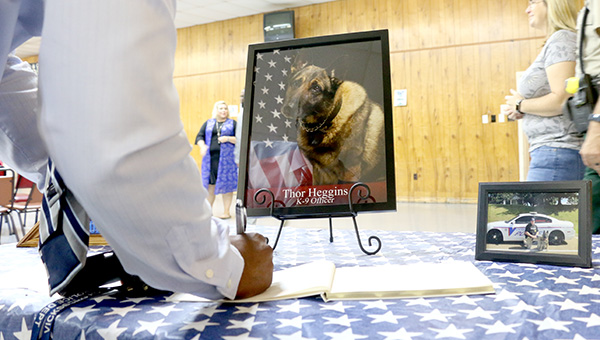 It was a solemn occasion Monday as members of the community gathered at American Legion Post 3 to pay their respect to fallen Vicksburg Police K-9 officer Thor.

More than 50 people, including those from the Vicksburg Police Department and the Warren County Sheriff’s Office, attended the memorial service, remembering the officer who died Sept. 4.

One police officer even saluted a picture of Thor that had been placed on a table alongside an American flag and a guest book.

The service began with a 21-bell tribute followed by an introduction and prayer from the Rev. Randy Burns, who quoted John 15:13, saying, “Greater love has no man who lays down his life for his friends,” Certainly, Thor served his friends well.

The pure-bred German Shepherd served with the Vicksburg Police department since 2012 with Police Officer Donnie Heggins serving as his handler.

Thor was trained in narcotics, apprehension and tracking, and according to a Vicksburg Police Department, was credited with more than 60 felony arrests, apprehensions and drug arrests.

During the service, Rev. Tommy Curtis based his message on Matthew 5:9, which states “Blessed are the peacemakers, for they shall be called children of God.” Oddly enough, Donnie, and his wife Beth had placed that verse on the front of the program for the memorial service, which Curtis had not seen prior to delivering his message.

“It had to be a God thing,” Beth said. “Tommy had not seen the program and then that is what he talked about. It gave both Donnie and I chills.”

Both Donnie and Beth said the turn out for the service was moving.

“We were both very pleased and heartfelt at all the people who came out for the memorial service, even strangers,” Beth said. “It was pretty amazing to see all the support from the community, and the ceremony was perfect.”

Beth said she and her husband were grateful to the American Legion Post 3 for use of the building for the memorial service.

“They donated the building to honor Thor, and we were grateful for this,” she said. “It’s been a tough one,” Beth said.

Flags in Vicksburg ordered to half-staff in honor of…