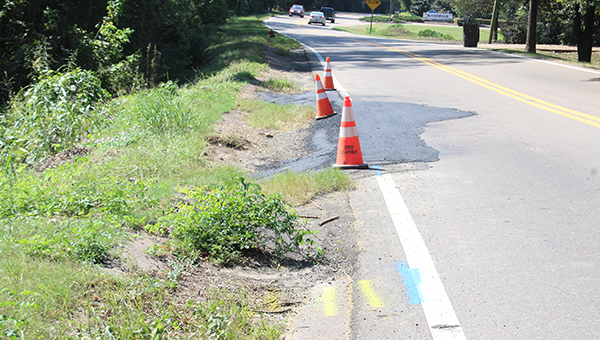 A barricade marks the spot where a section of Warrenton Road near Riverwalk Casino is sinking. City officials have closed the road to through truck traffic until the problem is repaired. (John Surratt/The Vicksburg Post)

A depression in the road has forced city officials to close Warrenton Road to trucks.

Public Works director Garnet Van Norman said trucks for two rock hauling businesses on the south end of Warrenton will be required to use Wigwam Road as a detour to U.S. 61 South when they leave the businesses to take their loads to other areas.

“We don’t know the cause,” Van Norman said of the problem, “(But) there’s got to be a void underneath it because all the pavement’s going down. We’ve got to get it built up and probably tear it out and see what can fix it and get it back open again.”

Both ends of Warrenton Road have small barricades topped by flashing yellow lights and holding signs telling drivers the road is closed to trucks.

The depression is north of the entrance to Riverwalk Casino and marked by orange cones. Asphalt has been placed over a section of the road, but the depression is visible on the shoulder.

Van Norman said the city has an easement with the owner of the property adjacent to the problem and is trying to negotiate to get dirt from a nearby pit for the work.

“As soon as we get it, we’re going to start working on it, “ Van Norman said. “We’ve already moved the equipment in.”