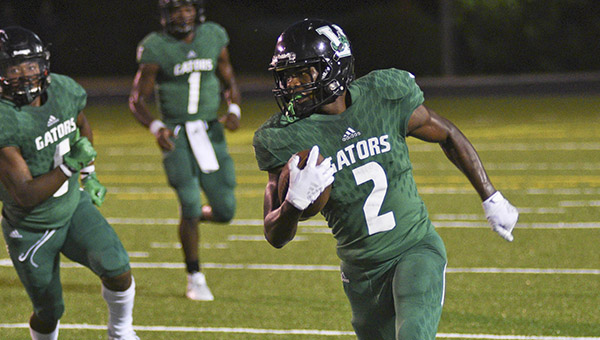 Vicksburg High's Cedric Phillips (2) runs against Benton High during Friday’s game. Phillips rushed for 109 yards and a touchdown on only eight carries, but the Gators lost 49-48. (Courtland Wells/The Vicksburg Post)

1
In sports, moral victories are never as good as the real thing. Vicksburg High and Warren Central, however, both gained a lot in losses on Friday night.

Vicksburg staged a memorable comeback, rallying from 21 points down in the last 9 ½ minutes of the fourth quarter, before losing 49-48 to Benton (La.) in overtime.

Quarterback Sha’Kori Ragan accounted for 342 total yards and five touchdowns — three of them in the last 6:11 of regulation — and either passed the football or ran with it on 21 consecutive plays.

The Gators lost when a low, bobbled snap negated a tying PAT attempt in overtime, but the comeback against a solid Louisiana Class 5A team was something head coach Tim Hughes said would pay big dividends down the line. The Gators (1-3) have a bye this week and begin Region 2-5A play on Sept. 27, at home against Provine (4-0).

“It’s a four-quarter thing. We’ve still got to be better for four quarters. That’s something to learn from. How possible is it if we decide to do that for four quarters?” Hughes said. “Even though it ended up the way it ended up, I think these kids come up with a lot of air in their chests. They finally can say, ‘This is something I can do.’”

Warren Central, meanwhile, gave No. 3 Brandon all it could handle before losing 10-9. The Vikings had a slew of self-inflicted wounds that cost them a chance at the victory. They missed two field goals and a PAT, and lost two key fumbles — one of which was returned for Brandon’s only touchdown.

Although the Vikings were left feeling that they let a big win slip away, the overall performance was a welcome boost after a 42-0 rout at the hands of No. 2 Pearl two weeks earlier. Warren Central was never really in the game against Pearl, and taking Brandon to the wire showed it can compete with some of Mississippi’s elite teams.

That will be important as the Vikings begin Region 2-6A play following their bye this week. Three of the top five teams in the Associated Press Class 6A poll — Madison Central, Starkville and South Panola — are in the region.

“Obviously, we’re very disappointed that we didn’t win. We had chances, for sure, and didn’t make the plays to take over,” Warren Central coach Josh Morgan said. “But we’re going to use it to make ourselves better and keep on pressing. We’re getting better week in and week out. If we continue to learn and work, we can turn our non-district schedule into a positive.”

2
Saturday’s game between Southern Miss and Troy was not one that showed up on the national radar, but turned into one of the most entertaining games of the college football weekend.

The teams combined for 1,154 yards of total offense and 89 points as Southern Miss outlasted the Trojans 47-42.

In one sequence early in the fourth quarter, the Golden Eagles and Trojans scored three touchdowns in three plays, in a span of 25 seconds. USM’s Jack Abraham threw a 51-yard touchdown pass to Jordan Mitchell, Troy’s Reggie Todd returned the ensuing kickoff 69 yards to the end zone, and then USM’s Jaylond Adams took the next kickoff 100 yards for yet another touchdown.

Abraham completed 28 of 36 passes for 463 yards and two touchdowns. It was the second-highest single-game yardage total in USM history behind Nick Mullens’ 591 yards against Rice in 2016. Abraham also broke his own school record with 17 straight completions.

Adams, who had his second kickoff return touchdown in the first three games of the season, finished with the second-highest all-purpose yardage total in Southern Miss history. Adams had 322 yards, trailing the 335 Sam Dejarnette had against Florida State in 1982.

Adams caught 11 passes for 180 yards, had one rushing attempt for one yard, and 141 yards on punt and kickoff returns.

Adams was named the Conference USA special teams player of the week for the second time in three weeks.

3
Southern Miss and Troy weren’t the only ones with an exciting trade of quick touchdowns.

Jackson State’s Josh Littles returned the opening kickoff 100 yards for a touchdown, and then Tennessee State’s Chris Rowland took the ensuing kickoff back 96 yards to put another TD on the board less than 30 seconds into Saturday’s game.

Jackson State and Tennessee also played a high-scoring shootout, combining for 988 yards as Jackson State won 49-44 in the Southern Heritage Classic in Memphis. JSU rushed for 338 yards and five touchdowns as a team.

4
MAIS 8-man football powerhouse Tallulah Academy ran its record to 3-0 on Friday night by crushing Claiborne Academy 50-12. Quarterback Carter Thompson ran for 280 yards and six touchdowns on only six carries, with all six touchdowns coming from 30 yards or more.

During a run of three state championships in four seasons, the Trojans have made their offensive name with quick drives and big plays, and this season is no exception.

The average might go up a bit this week. Tallulah will go on the road to Yazoo City to play Manchester Academy in a rematch of last year’s 8-man championship game Friday at 7 p.m. The two schools are in different classifications this season — Tallulah in Class 1A and Manchester in 2A — after the MAIS split the 8-man division into two classes.

Tallulah has won 16 consecutive games, while Manchester’s only loss since the start of last season was to Tallulah.