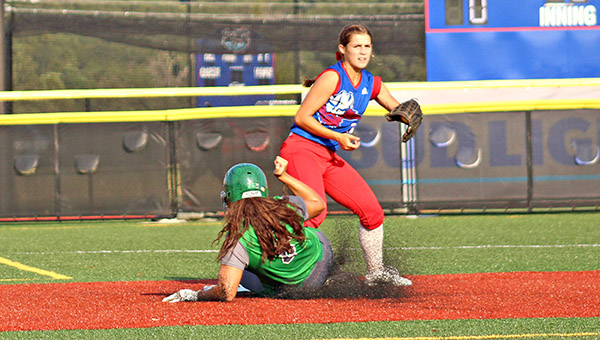 Vicksburg’s Lexi Kistler (6) slides into second base as Warren Central shortstop Kaylee Hoeft steps on the bag for a force out during Tuesday’s game at Sports Force Parks on the Mississippi. Warren Central won, 7-6, in nine innings. (Ernest Bowker/The Vicksburg Post)

The senior third baseman hit an opposite field single to right field with the bases loaded in the bottom of the ninth inning Tuesday to give the Lady Vikes a walk-off 7-6 victory over archrival Vicksburg High.

It was the first walk-off hit of Page’s career, and her only hit in five trips to the plate on Tuesday.

“I don’t want to say I was shaking too much, but I was,” Page said with a laugh.

The Lady Vikes (8-11-2, 3-0 Class II, Region 5) took control of the Region 5 championship race, but their work is only halfway done. They’ll play Vicksburg again on Sept. 26 and will need to at least win that game to take the title.

Vicksburg (15-6, 2-1), on the other hand, can still claim the region title by beating Warren Central by two or more runs in the rematch. Head-to-head run differential is the first tiebreaker, and both teams easily handled Clinton and Raymond in their other region games on the first trip through the schedule. 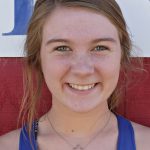 Given that, coach Brian Ellis said the Missy Gators didn’t lose much even by losing on Tuesday.

“Now the shoe is on the other foot and we have the opportunity to do what they did to us last year. We’ve got to beat them by two and we can still win the district,” Ellis said.

Vicksburg rallied from three runs down in the fifth inning, and tied the game at 5-all on a two-run home run by Sha’niya Lockridge.

Warren Central regained the lead in the sixth on a sacrifice fly by Logan Hardin, but Vicksburg tied it again in the seventh with a two-out RBI single from Lexi Kistler.
Kistler finished the game 4-for-5 with one RBI and one run scored.

“Obviously we made mistakes and walks that cost us runs,” Ellis said. “The good thing is, the girls battled back and we took the air out of their sails a little bit with the home run. We just couldn’t manage to get things all the way through. I’m proud of these girls. We fought.”

The game went to extra innings, and after each team was held scoreless in the eighth, Vicksburg left two runners on in the top of the ninth as the sun began to set.
The game was assigned to one of the fields without lights at Sports Force Parks on the Mississippi. The facility’s other fields were all either in use or configured for other sports, so another inning might have forced a suspension because of darkness.

Page and the Lady Vikes, though, made sure it didn’t come to that.

Malynn Kelley led off the bottom of the ninth with a double off the center field wall and Kayleigh Karel followed with a slow grounder to second that was bobbled for an error. Ellis elected to intentionally walk Bri Daughtry to load the bases and set up a force at home, which brought Page to the plate.

Page had walked in her first at-bat, and then grounded out twice and lined out to first in her next three trips to the plate. This time she hit a line drive over the head of VHS first baseman Charli Van Norman and into right field, bringing Kelley home with the winning run.

“I felt like I was clutch. We really needed this,” Page said.

Embry struck out seven batters, walked one and allowed three hits to lead PCA (16-8) to a victory over Manchester Academy on Tuesday.

Embry also had 12 strikeouts in another three-hitter Monday as PCA won 9-1 over Manchester in the first half of a home-and-home series. She had pitched five no-hitters in a six-game span earlier this season.

In Tuesday’s win, Embry also had two hits and scored two runs, while Ashlyn Wright was 2-for-3 with two RBIs and a run scored for PCA. Meghan Hinson was also 2-for-2 with one RBI.

Hinson and Katie Tillman each had RBI singles in the bottom of the first inning as the Lady Eagles jumped out to a 3-0 lead. They also scored three times in the third and fifth innings to win via the mercy rule.

Park Place completed the sweep with a 17-1 victory in game two. The two losses finished St. Al’s season with a 1-18-1 record.

St. Al only had one hit in game one — a first-inning single by Maddy McSherry — but scored three runs in the bottom of the second thanks to a hit batter and three consecutive walks.

McSherry, Grace Gannon and Victoria Moorehead each had a single for St. Al in game two. Tillery hit a grand slam and finished 2-for-3 with five RBIs for Park Place (10-9).