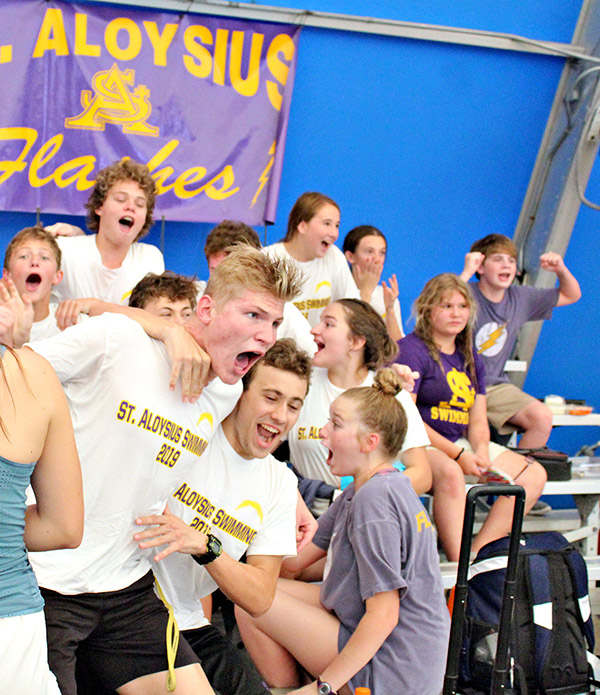 St. Aloysius swimmers Adam Eckstein and Tommy Martin, center, and their teammates react to the announcement that the Flashes won the team championship at the MAIS Overall State Swim Meet Wednesday in Flowood. It’s the first state championship for St. Al since it joined the MAIS In 2015, and also the first time in the meet’s 46-year history that a team other than Jackson Prep has won. (Ernest Bowker/The Vicksburg Post)

FLOWOOD — For each of the past 45 years, the MAIS Overall State Swim Meet ended the same way.

The PA announcer would list the scores, several teams would politely applaud upon hearing their names, and the championship celebration would begin once Jackson Prep’s name came over the speaker.

This year was no different — the names, polite applause, and wild celebration when Jackson Prep was called out. The only change was there was still one more school on the list when it happened.

St. Aloysius won 15 individual state championships and, at long last, ended a 4 ½-decade long dynasty by claiming the team title Wednesday at the 2019 MAIS Overall meet. It’s the first time since swimming became a championship sport in the MAIS in 1973 that Jackson Prep has not won the title.

“It was unbelievable. We’ve been trying so hard and waiting so long. I can’t really believe that we actually did it. Prep hasn’t lost since the MAIS has been in existence, so it was great to punch one through,” said St. Al senior Adam Eckstein, who won the state title in the 50-yard backstroke as well as two relays. “We get to be in the record books now as champions, and not just the boys (champions). We get to win.”

St. Al joined the MAIS in 2015 and immediately became a challenger to Jackson Prep’s reign. That year, the Flashes lost 18 points when a winning relay team was disqualified and lost by 13 in the final standings.

St. Al finished as the runner-up each of the past four years and its boys unofficially won the championship last year. At the state meet, the scores for boys and girls teams — as well as for the Grades 7-9 and 10-12 divisions — are combined for one total team score, and Prep retained despite its boys’ team being outscored by St. Al’s boys.

The near misses made Wednesday’s breakthrough even sweeter.

“We’ve been so close for, like, six years now. When we finally did it, it makes it even more surreal,” Eckstein said.

St. Al’s victory was powered by its steady stream of first-place finishes. The boys’ team won nine gold medals and the girls got six.

Eckstein took first in the 50-yard backstroke, while his fellow senior Tommy Martin won the 50 breaststroke and 100 freestyle. They teamed up with Spencer Carroll and Layne Sparks to win the 200 freestyle and 200 medley relays, as well.

The medley relay finished with a time of 1:47.62, just three-hundredths of a second off the state record St. Al set last year. It was also part of a 1-2 punch that helped the Flashes lock down the team championship. After the boys’ medley relay won its race, the girls relay of Leah Larson, Ann Elizabeth Farthing, Chandler Tucker and Samantha Graves finished first to close out the meet.

“It was really good. We came together as a team. We had three or four state championship relays, so that’s always nice to see. Every time you would see one of us racing, the whole team was behind the blocks. As a team, I think we performed really well,” Eckstein said.

In the Grades 7-9 division, Jon Daniel Busby won the 100-yard individual medley and the 50 breaststroke. Beau Harris was first in the 50 backstroke and second in the 50 freestyle.

On the girls’ side, Larson took gold in the 50 backstroke and 50 butterfly, as well as in the medley relay. Farthing won the 50 breaststroke, while Graves earned a second-place finish in the 100 freestyle.

Emily Cook won two sprint championships in the Grades 7-9 division, in the 50 and 100 freestyle.

“They’re all best times. I’m pretty proud,” said Larson, a sophomore who now has five individual state titles to her credit. “It was a great day. Being on a high school team is different than being on a city team because you’re all going toward a common goal instead of everybody being out for themselves.”

Winning the state meet also was a memorable way for the seniors Eckstein and Martin to finish their high school careers. They were both on the medley relay team that set the state record in 2018, and each has won nine individual or relay state championships in the past five years.

Considering Harris, Busby, Sparks and Carroll are all underclassmen who will be returning for several more years, Eckstein said he’s both proud of what he and Martin accomplished and excited for what the others might do after they’re gone. He hinted it could even be the start of a new dynasty.

“Even though this is our last year, it’s not the last year for St. Al. Beau is faster than I was in seventh grade. We have a lot of great talent, so they’ll be good for years,” Eckstein said. “We definitely have something to be proud of. We came in our first year and got second by, like, six points. Prep has never lost so we’ve really challenged them and we’ve always gotten at least second. Our boys team won last year. We got rings and everything. We’ve each accumulated a bunch of individual titles so it’s a good feeling. I feel like we’ve left a good legacy.”