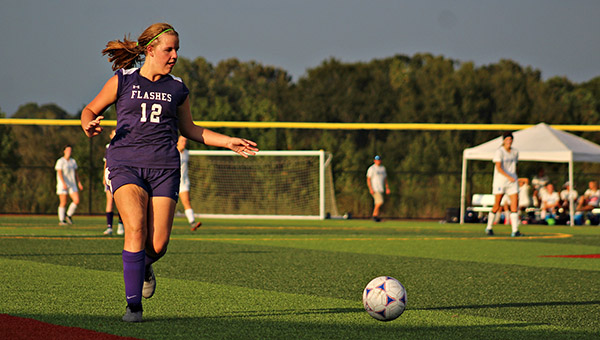 The defense of its MAIS Division II girls soccer championship has not been a smooth one for St. Aloysius. It’s been an up and down season in which some top-level competitors have surged ahead in the standings and the prospects of a repeat have sometimes seemed dim.

Over the past 48 hours, however, the Lady Flashes have at least set themselves up to make a run at it.

Ann Elizabeth Farthing scored in the first three minutes of the game, Elizabeth Theriot had two goals, and St. Al won its second game in two days on Thursday by beating Bayou Academy 4-1 at Sports Force Parks on the Mississippi.

That victory came after the Lady Flashes won 2-0 in overtime against Washington School on Wednesday in another West District game. The two wins put St. Al in a position to make the playoffs, provided it can beat Bayou again in the regular-season finale on Sept. 26 in Cleveland.

Bayou would need to beat St. Al by at least three goals to make up the difference from Thursday’s game and throw the playoff race to another round of tiebreakers.

“It’s two key wins in a row. They played two district games back-to-back and that’s great. They were resilient and played as a team,” St. Al assistant coach Maurice Gilliam said. “We finished. We knocked the wind out of them in the first minute of the game and controlled the whole game, and they were able to pull it off.”

Despite Wednesday’s marathon match, the Lady Flashes showed no signs of fatigue early on against Bayou. Farthing — who won two state titles at the MAIS state swim meet Wednesday morning, then played in the soccer game in the evening — put a shot over the head of Bayou’s keeper less than 90 seconds into the game for a quick 1-0 lead.

“It was big for momentum. What it did was it gave the girls confidence. When they scored that first goal, it let them know that they could play with this team. I think last year this team beat them pretty bad. But after that, we had control of the game,” Gilliam said.

Theriot added a second goal in the 15th minute to put St. Al firmly in control, and it never let up.

Theriot scored again, this time on a penalty kick, in the third minute of the second half and Madisyn Miller knocked in a loose ball in front of the net in the 57th minute of the match to put St. Al ahead 4-0.

Bayou’s Sydney Davis scored in the 66th minute to spoil the shutout.

“It was very tough. We’re not used to playing back-to-back games like that, especially since it went into overtime. It was very stressful because we needed this win,” Theriot said. “Our team chemistry has gotten a lot better. We had a rocky start to this season, but it’s gotten better.”