It’s not bits of fluffy cotton, but it is a bit ‘Wooly’ 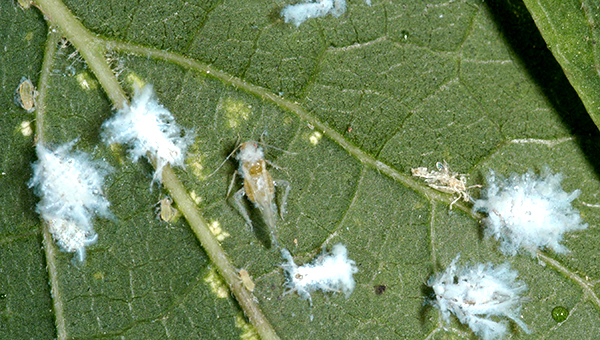 One day this past week I noticed what looked like very tiny bits of cotton floating in the air. I knew right off what they were and wondered why it had been so long since I had seen any. Probably I just hadn’t noticed them in recent years. They have been around since the late 1990s, which was about the time I first saw them.

They are hackberry aphids, the complete Americanized common name being Wooly Asian Hackberry Aphid. These insects got to the U.S. unintentionally 25 or so years ago and spread across the South, then hitched a ride on something to California.

Luckily, the only food source for these bugs is juice sucked from the leaves of hackberry trees, which are very common hereabouts but are not among our valued timber trees. Nor does anyone intentionally plant hackberries for shade trees. But if you’ve got some already growing in the yard providing shade where you want it, let them be. The hackberry is tough, drought-tolerant and produces berries that wildlife appreciates. Plus the trees always survive the aphids.

There are several aphid species that have the terms “wooly” or “cottony” in their common names. Hackberry aphids certainly appear to be covered with one or the other, wool or cotton. But bugs don’t grow either. What it is is actually strands of wax growing out their bodies. Just like other aphids and the plant-sucking whiteflies and scale insects, hackberry aphids swallow sap and excrete the leftovers as clear, sticky honeydew, which usually turns black with sooty mold that drips off the trees.

Yes, it’s the same thing that happens with pecan trees: don’t park your white car under a hackberry summer through fall. But the only reason a person should whine about hackberry aphids at home would be if a hackberry hangs over an open patio. That’s what water hoses and nozzles are for.

Hackberry aphids are indeed flying when we see their very slow aerial movement. The only thing that speeds them up is a tailwind. Sometimes someone will mistakenly think they are whiteflies. They are not. Whiteflies fly much faster. Aphids and whiteflies are not in the same insect family, not even kissing cousins.

Like all aphids, the hackberry species gives birth to live young through the warm season and then lays one batch of eggs that lasts through winter to hatch come spring.

Somewhat of an oddity, all the spring-born new hackberry aphids are females that give birth without fertilization. The proper long word for that phenomenon among animals is parthenogenesis. The second generation does include males and aphid mating then becomes a reality.

I verified the flying aphids I saw were indeed the hackberry ones by a less-than-scientific method. I drove around the edge of the woods on my place and stopped at every hackberry tree. Sure enough, the wooly white critters were on most leaves, as was the shiny honeydew and some sooty mold. Nature being nature, there was an occasional ladybug having a big ol’ time gobbling up aphids.