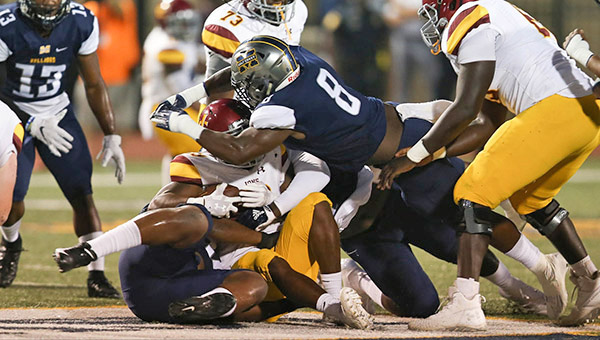 Jones College’s bid for a remarkable comeback came up one play short on Thursday night.

The Bobcats scored twice in the fourth quarter to slice a 20-point deficit to six, but Mississippi Gulf Coast came up with a red zone stop with just over a minute left to win 20-14 in a Top 20 showdown in Perkinston.

Jones quarterback Fred Barnum, a former Warren Central star, threw a 12-yard touchdown pass to Manny Jones to start the comeback with 13:53 left in the game. Ladamian Webb cut it to 20-14 with a 7-yard TD run with 5:59 left.

Barnum completed a 29-yard pass to Natorian Watts and Webb carried on three straight plays to move the ball to the 7-yard line. Jones bogged down there, however.

An illegal substitution penaly and an incomplete pass on third down made it fourth-and-6 at the Gulf Coast 12-yard line. Navonteque Strong sacked Barnum at the 22-yard line on the next play to force a turnover on downs with 1:04 remaining, and Gulf Coast ran out the clock.

Barnum finished 9-of-20 passing for 116 yards, with one touchdown and one interception. Webb ran for 73 yards and a TD. The Bobcats had 232 total yards.

For Gulf Coast, Chance Loveritch completed 18 of 25 passes for 202 yards and one touchdown and one interception. Omni Wells ran for 50 yards and a touchdown.

Urriah Shephard ran for 115 yards and a touchdown for Northwest, which led 19-0 after Cole Catalano’s 33-yard field goal midway through the third quarter.

Co-Lin got on the board with a 37-yard TD pass from Danny Clark to Antoine Robinson 3 1/2 minutes later, and cut it to 19-14 on Tyrus Wheat’s 24-yard fumble return TD early in the fourth quarter.

Co-Lin’s last two drives, however, both ended on downs. A 10-play march reached the Northwest 33-yard line before stalling, and the Wolves’ final drive crept inside Ranger territory as the clock ticked under two minutes.

Two incompletions and then the sacks by Hentz and Jackson ended the Wolves’ last chance.

Southwest Mississippi (0-4, 0-2) was shut out for the second game in a row.
Hinds scored the only touchdown of the game five minutes into the first quarter when quarterback Jack Garrad found former Warren Central star Joe’vontae Shorter on an 8-yard pass to cap an 11-play, 66-yard drive.

The Eagles’ other score came off the foot of kicker Conner Smith, a former St. Aloysius standout, who connected on a 21-yard field goal with 10 minutes remaining in the fourth quarter.

Sophomore running back Don Ragsdale led the way for the Hinds offense with 27 carries for 107 rushing yards. He also caught three passes for 20 yards.

Linebacker Tyler McDaniel had 13 tackles, including 5.5 tackles for loss, two sacks and two pass breakups. As a team, Holmes had six sacks.

Coahoma also got a 53-yard touchdown run by Hiram Wadlington in the second quarter to take a 24-7 lead. Coahoma got as close as 24-21 before Mills’ 40-yard TD pass to Qua Davis in the opening minute of the fourth quarter gave Itawamba some breathing room.

Edwards completed 10 of 12 passes for 79 yards and the three touchdowns, including an 11-yarder to former Vicksburg High star Joshua Pedyfoot in the third quarter.

East Central also scored on a 37-yard interception return by Fred McGee, and on special teams when Alvin Dempsey recovered a wild punt snap in the end zone.

Quarterback Connor Neville, a Washington State transfer, completed 27 of 41 passes for 309 yards, one touchdown and one interception for East Mississippi (3-1, 2-0).