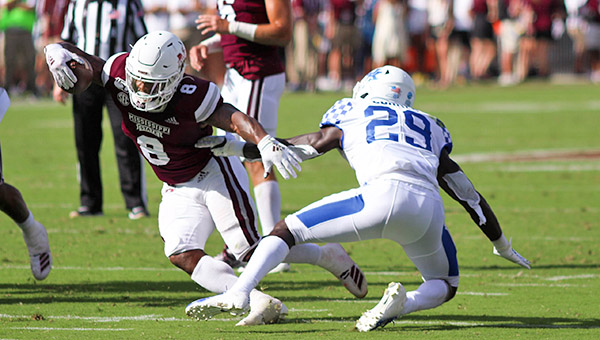 Mississippi State running back Kylin Hill (8) jukes Kentucky defensive back Yusuf Corker (29) during Saturday’s game in Starkville. Hill ran for 120 yards and three touchdowns to lead the Bulldogs to a 28-13 victory. (Walter Frazier/For The Vicksburg Post)

STARKVILLE (AP) — Kylin Hill rushed for 120 yards and three touchdowns to lead Mississippi State to a 28-13 victory over Kentucky on Saturday.

Mississippi State (3-1, 1-0 SEC) handed the ball to Hill, the Southeastern Conference’s leading rusher, 26 times in the game, taking some of the offensive pressure off freshman quarterback Garrett Schrader who started in place of injured senior Tommy Stevens.

Hill has rushed for 100 or more yards in all four games this season. He became the first Mississippi State running back with at least three rushing touchdowns in a game since Vick Ballard had three in 2011 at Memphis.

“He was a grown man out there,” Kentucky coach Mark Stoops said of Hill. “You can see a great player there, with a great desire to make some tough runs. That’s a very good football player.”

Shrader, who played the entire second half last week, was another offensive highlight, throwing for 180 yards and rushing for 125 in his first full game managing the offense. He was 17-of-22 passing, with no touchdowns and one interception.

Shrader had the two longest rushes of the day for Mississippi State with a 49-yard carry late in the fourth quarter and a 36-yard scamper in the second.

“I don’t know that there’s too many freshman quarterbacks around the country playing like that,” Mississippi State coach Joe Moorhead said.

Kentucky (2-2, 0-2 SEC) had 386 yards of total offense but found the end zone only once, on Kavosiey Smoke’s 2-yard run in the third quarter. Mississippi State consistently frustrated Stoops’ team late in drives, and the Wildcats converted only two of their four field goal attempts.

“You’ve just got to find a way to win,” Stoops said. “And getting behind and not punching it in when we’re moving the ball, and not getting scores in the red zone and missing kicks and things of that nature is not a good recipe right now.”

The Mississippi State defense set the tone early. On the game’s opening drive linebacker Willie Gay Jr. intercepted Sawyer Smith and returned the ball 53 yards for a touchdown. Mississippi State has now had a takeaway in 20 consecutive games, but Gay’s pick-six was its first defensive touchdown since 2017.

Gay and multiple other defensive starters have been suspended for much of the season due to a violation of team rules believed to be related to an academic dishonesty scandal that carries NCAA-mandated suspensions.

“Getting in a hole really hurt us,” Stoops said. “We were doing a nice job of moving the ball and keeping them off balance, then obviously the pick-six in an environment like this just gives them a chance to explode. Then you feel like you’re playing catch-up the rest of the first half. The rest of the entire game, really.”

“I love Willie,” Moorhead said. “I think Willie is one of top linebackers in the country. He’s big, he’s fast, he’s strong and he’s passionate. Sometime that passion is a little misguided, maybe, but he’s a guy who loves Mississippi State, loves this team and this defense. I wish we had a hundred Willies.”

Hill punched in two touchdowns in the second quarter and Mississippi State led 21-3 at the half. The Bulldogs added Hill’s 1-yard scoring run in the fourth quarter.

Smith was 15-of-41 passing for 232 yards to lead Kentucky. Asim Rose rushed for 105 yards on nine carries and Lynn Bowden had a game-high seven catches for 127 yards.