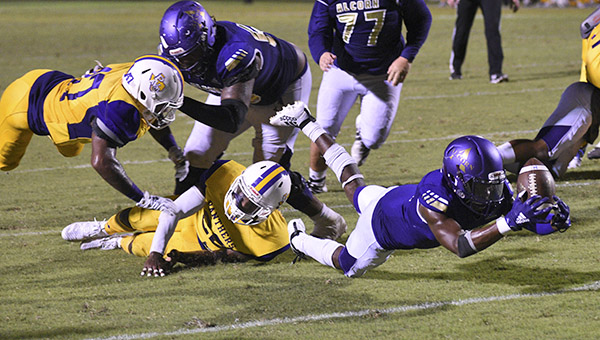 Alcorn State's Niko Duffey (5) dives into the end zone for a touchdown Saturday against Prairie View A&M. Alcorn scored in the final minute of the game to win 45-41. (Courtland Wells/The Vicksburg Post)

LORMAN (AP) — The No. 2 quarterback on Alcorn State’s depth chart made the Braves feel like No. 1.

Harper made his first career start, subbing for the injured Noah Johnson. He completed 25 of 37 passes for 280 yards and two touchdowns, and also ran for a score.

“Noah went down last week and when your starter goes down, you always want your number two guy to be ready. We always tell them the ‘next man up,’” Alcorn head coach Fred McNair said. “I thought Felix came in in his first start, did an outstanding job filling in for Noah this game and made all the right throws, right reads and did everything correctly as we expected as a backup quarterback.”

Alcorn jumped out to a 17-0 lead in the first quarter, but Prairie View answered with 19 straight points to grab the lead. A blocked punt set up a 1-yard touchdown run by Dawonya Tucker to put the Panthers in front midway through the second quarter.

Alcorn, however, took a 24-19 lead into halftime after Harper scored on a 5-yard run following a Prairie View turnover and the teams went back-and-forth throughout the second half.

Jalen Morton threw two touchdown passes to Jordan Jones to give Prairie View a 34-24 lead with 6:31 left in the third quarter. Alcorn ralled with two scores of its own, runs of 7 and 6 yards by Niko Duffey, to go back in front 20 seconds into the fourth quarter.

Prairie View regained the lead yet again on a 12-yard touchdown run by Tucker, making it 41-38 with 12:27 remaining.

“A game of this magnitude you’re going to have lead changes,” Fred McNair said. “Their offense was explosive and their defense played hard. In a back-and-forth scoring game like that, you just hope to have the last chance with the ball and win it.”

Alcorn, essentially, did just that.

After the teams traded punts, Harper directed a 14-play, 65-yard drive that ended with his game-winning toss to Tim McNair Jr. The Braves’ march started at their own 35 with 5:20 left and took all but the last 40 seconds off the clock. They converted two third downs — including the touchdown play — and one fourth down along the way.

On 3rd-and-1 from the 3-yard line, Harper rolled out to his right and hooked up with McNair Jr. for the game-winner.

The Panthers had one last chance, as an unsportsmanlike penalty on Alcorn on the kickoff started their drive at the 40-yard line with 40 seconds to go. The Panthers advanced to the Alcorn 43, but three consecutive incomplete passes ended the game.

“We just believed in our coaches’ strategy and the game plan as we just followed through with it. We didn’t bend, we just stuck to the game plan and everybody did their job. The outcome was great,” said Alcorn linebacker Solomon Muhammad, who had a career-high 18 tackles and one sack.

Harper wasn’t the only Alcorn player to have a big night.

LeCharles Pringle caught eight passes for 144 yards and a touchdown, and Duffey ran for 86 yards and two TDs.

Pringle more than doubled his previous career-high of 63 yards against Louisiana College in 2018. His eight receptions topped his previous best of five set last week at McNeese State.

“LeCharles grew up today as a football player. He played a phenomenal game, made all the catches that he needed to make, and the kid’s only going to get better. We’ve got him playing various positions, inside and outside receiver, and he made those adjustments,” Fred McNair said. “I think this offense really grew up today as a whole and the defense played hard. We created turnovers and we were able to capitalize on those.”

For Prairie View, Morton completed 23 of 35 passes for 321 yards and four touchdowns, but he was intercepted three times. Tucker ran for 128 yards and two scores on 22 carries.