Fiber Fun in the ‘Sip kicks off Thursday 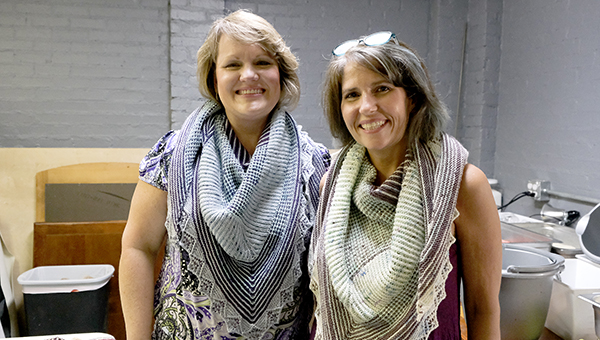 Organizers of the second annual Fiber Fun in the ‘Sip, Judy Busby and Emily Wolfe, expect thousands of visitors to attend the event which kicks off Thursday. (Courtland Wells/The Vicksburg Post)

Fiber Fun in the ‘Sip will kick off its second year in Vicksburg and thousands are expected to attend.

Held at the Vicksburg Convention Center, the fiber festival will include juried vendors, classes, jazz music, a themed cocktail punch entitled a Tangled Mess and a sit and stitch area.

“This year we will also have a knitting and spinning contest and a fashion show,” organizer and local resident Judy Busby said.

The fashion show will be comprised of crafters who participated in the mystery knit/ mystery crochet along, Busby said.

The mystery knit/mystery crochet along was an idea Busby came up with in an effort to enhance the fiber show.

Both designers agreed to create patterns.

Busby then began the hype around the “mystery” in May on social media and the first week of July followers found out they would be knitting/crocheting a shawl.

However, a full set of instructions for the design was not released, Busby said.

“Weekly clues were given for them to progress the pattern,” she said.

This went on for four weeks until all of the pattern instructions were available.

Participating vendors, who will be at Fiber Fun in the ‘Sip, also got involved, Busby said.

They put together kits for the mystery knit/ mystery crochet along that included yarn and the appropriate sized needle that would be needed.

Busby said her idea of a “mystery knit-along” was so alluring there were even those from other countries who took part.

“We had people from Germany and Russia who participated, and this meant they were also hearing about Vicksburg,” she said.

Fiber Fun in the ‘Sip will host 42 vendors and 57 fiber classes, which include knitting, crocheting, spinning, weaving, yarn dyeing, felting and kumihimo, which is the art of Japanese braiding.

People are already signing up for classes, Busby said, and noted some of them were coming from as far away as Atlanta, Ga.

Entertainment for the festival will be trumpeter Kimble Funchess and food and cocktails will be available for sale.

Classes will begin at 1 p.m. Thursday at the convention center, 1600 Mulberry St. and continue through Saturday.

Admission is $5 for a day pass and $7 for a weekend pass.

For more information and a complete listing of vendors, classes, teachers and sponsors, visit fiberfuninthesip.com.