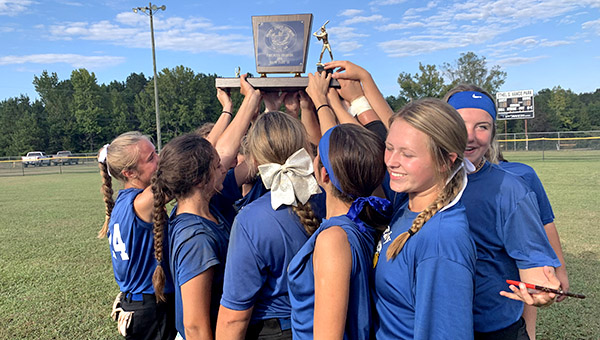 After years of close calls and encouraging finishes, “next year” has finally arrived for the Porter’s Chapel Academy softball team.

The Lady Eagles won two games on Monday, the second a 3-0 victory over Centreville Academy, to win the MAIS Class 2A South State championship and complete an undefeated run through the tournament.

PCA outscored its opponents 35-1 in four games in the South State tournament.

PCA ripped through the first two rounds on Saturday, beating Providence Classical 18-0 and Sylva-Bay 11-0. It then beat tournament host Centreville 3-1 in a winners’ bracket game Monday morning, and faced Centreville again in the championship game a few hours later.

Macey Bufkin hit an RBI single in the second inning, and another in the third. She finished the game 2-for-3 with two RBIs.

Storey Kirklin also had an RBI single in the third inning, and that was more than enough offense for pitcher Hannah Embry.

Embry, a senior, allowed one hit, one walk, and struck out nine in a complete game victory. She also went 2-for-2 with a walk and a run scored at the plate in the championship game, and was 2-for-3 with a solo home run and two runs scored in the first win over Centreville.

In three games in the tournament, Embry pitched 19 innings and allowed one run, seven hits, three walks, and struck out 35 batters. At the plate, she was 5-for-6 with a home run, double, five RBIs and eight runs scored.