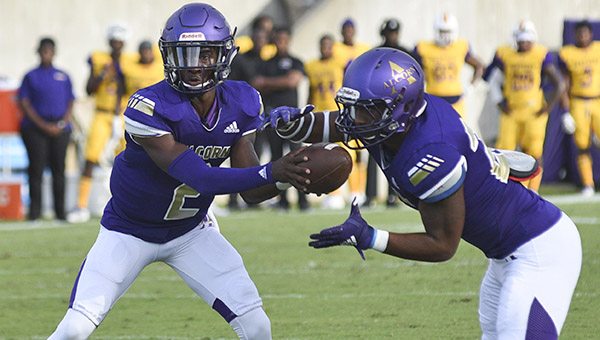 Alcorn State quarterback Felix Harper (2) hands the ball off to Trey Turner (25) during Saturday’s game against Prairie View A&M. Harper, a redshirt junior who was making his first college start, accounted for three touchdowns in the game and on Monday was named the SWAC Offensive Player of the Week. (Courtland Wells/The Vicksburg Post)

You’re in Four Down Territory. Each week we’ll spotlight four notes, stats or trends from the weekend that was in Mississippi high school football, college football, and the NFL.

1
During its five-year reign as Southwestern Athletic Conference East Division champions, Alcorn State has made a habit of always having its next great quarterback ready to go.

In 2016, Lenorris Footman replaced John Gibbs. Footman was in turn succeeded by Noah Johnson, who won the SWAC’s Offensive Player of the Year award in 2018. And, when Johnson was injured against McNeese State two weeks ago, it was Felix Harper who stepped in and stepped up.

With Johnson still out for Saturday’s SWAC opener against Prairie View A&M, the redshirt junior Harper got his first start at quarterback. Harper completed 25 of 37 passes for 280 yards and two touchdowns, including the game-winner to Tim McNair with 40 seconds left, as the Braves won 45-41.

Harper also ran for a touchdown. On Monday he was named the SWAC’s Offensive Player of the Week.

“I think I did great. I thank the defense for giving me opportunities to score, I thank my offensive line for getting me in position to pass the ball to my receivers, thanking them for catching it, the running backs also and it made me look great,” Harper said.

Harper played the second half of a 17-14 loss to McNeese State after Johnson was injured, but Saturday’s game was his first career start. He nearly matched his career passing yardage total of 320 yards and kept Alcorn’s offense humming during a wild back-and-forth game.

The Braves blew an early 17-0 lead, rallied from a 10-point deficit in the third quarter, and then engineered a 14-play touchdown drive to win it. On the final drive, Harper completed a 13-yard pass to Chris Blair on fourth-and-3 from the Prairie View 36, a 16-yard pass to LeCharles Pringle on an earlier third-and-14 play, and the touchdown on third-and-1 from the 3-yard line.

“Noah went down last week and when your starter goes down, you always want your number two guy to be ready. We always tell them ‘next man up,’” Alcorn head coach Fred McNair said. “I thought Felix came in in his first start, did an outstanding job filling in for Noah this game and made all the right throws, right reads and did everything correctly as we expected as a backup quarterback.”

2
The touchdown that wasn’t will live in infamy in Oxford for a while. Ole Miss head coach Matt Luke didn’t spend a lot of time dwelling on it during his Monday press conference, however.

Ole Miss was denied a touchdown in the final seconds of Saturday’s game against No. 15 California when receiver Elijah Moore was ruled to have caught a pass inches outside the goal line even though most of his body was in the end zone. The Pac-12 officiating crew did not signal for a replay review, forcing Ole Miss to quickly run another play.

Quarterback John Rhys Plumlee was stuffed on a sneak on fourth down from the 1-yard line as time expired, and California escaped with a 28-20 victory.

“Everyone knows it should have been buzzed and reviewed. That’s obvious, and I think everybody understands that. I think (Moore) scored, but it’s time for us to move on and get ready for Alabama,” Luke said on Monday.

Also on Monday the Pac-12 issued a statement on the call. The league office said the play should have been reviewed, but that the on-field call was correct — or at least there was no irrefutable video evidence to overturn it.

“Even though the receiver’s feet are in the end zone, the ball has not penetrated the plane of the goal line as is required by rule,” David Coleman, Pac-12 vice president of officiating, said in a video published along with the statement.

The Pac-12 said in its statement that the third down play was quickly reviewed by replay officials, but acknowledged the game should have stopped for a formal review.

“However, the Conference acknowledged that Instant Replay should have used better judgment to stop play for a formal review of the third down play,” the Pac-12’s statement said. “Had there been a formal review, and by using all available broadcast video, there was no irrefutable video evidence that the ruling short of the goal line on the pass play could be overturned to a touchdown and the call on the field of no touchdown would have stood.”

3
Tallulah Academy is still the defending MAIS 8-man football champion, but it might have to cede the title of 2019’s best team to Manchester Academy.

Parks Poe scored three touchdowns — on a 6-yard fumble return, a 46-yard reception and a 49-yard run — as Manchester beat Tallulah 32-12 on Friday in a rematch of last year’s 8-man championship game.

Walker Sullivan and Ty Schaufele scored touchdowns for Tallulah (3-1), which had a 16-game winning streak snapped. Even rarer than the loss was that Tallulah’s high-powered offense was slowed to a crawl.

The Trojans had been averaging a touchdown every four plays during their winning streak. They scored twice in 55 snaps and had just 227 total yards against Manchester (5-0). The 12 points they scored was the lowest total since a 24-0 defeat to Briarfield in the 2017 playoffs.

The good news for the Trojans is that they are still favorites to win a fourth state championship in five seasons. The MAIS split the 8-man division into two classifications this season. Tallulah is in Class 1A while Manchester is in Class 2A, meaning they won’t have to go through each other in the playoffs.

4
Mississippi State running back Kylin Hill ran for 120 yards and a career-high three touchdowns on Saturdayto lead the Bulldogs to a 28-13 victory over Kentucky in their SEC opener.

Hill had his fourth 100-yard rushing game to start the season, and is the first Mississippi State player to achieve that feat since at least 1990. The last MSU running back to do it at any point in a season was Anthony Dixon, who had five in a row in 2009.

Hill’s three touchdowns also marked the first time a Mississippi State running back has done it since Vick Ballard in 2011.

Hill ranks third in the Football Bowl Subdivision in rushing yardage, with 551. Only Oklahoma State’s Chuba Hubbard (642) and Colorado State’s Marvin Kinsey, Jr. (556) are ahead of him. Hill is fourth in the country with 91 rushing attempts, and also has five touchdowns.

Hill, a junior, had 117 carries for 749 yards and four touchdowns last season.