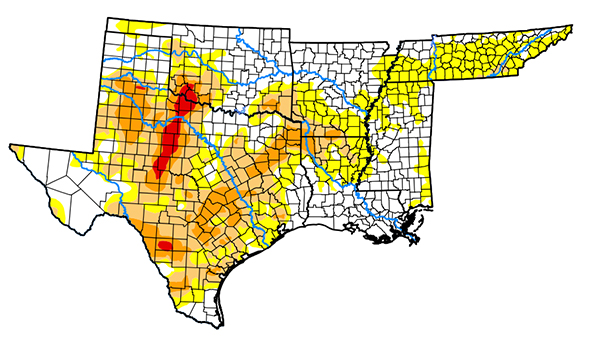 With just a few days left in September, the National Weather Service has reported zero — yes zero — rainfall for the Vicksburg area. For a year that has seen an above-average rain total thus far, having nearly a month without any rain is uncommon.

According to the National Weather Service records, the Vicksburg has averaged more than two inches at this point during an average September.

What has come with that dry weather is also the increased risk for grass fires in the area. Thankfully, though, local fire officials have said that threat has not yet become reality.

“We have not seen an increase in grass fires,” Warren County Fire Coordinator Jerry Briggs said. “Most of the ones county volunteer fire departments have been called to were caused by sparks from a chain dragging the road or from the rim on a car with a flat tire or someone tossing a cigarette out of a passing car. Nothing caused by someone burning trash outside.

“There is some concern with the dry weather with people parking off the road in tall grass and the exhaust pipes or something under the car starting a fire,” he said.

“We are seeing some grass fires, caused by sparks from something dangling on the road,” Danczyk said. “We did have a case where a woman pulled off the road and heat from the car’s exhaust started a fire.”

In its most recent weekly report filed, the U.S. Drought Monitor did move portions of Mississippi, including a swath of Warren County, into the first level of drought conditions.

The U.S. Drought Monitor is produced through a partnership between the National Drought Mitigation Center at the University of Nebraska-Lincoln, the United States Department of Agriculture and the National Oceanic and Atmospheric Administration.

The report, which was dated Sept. 17, said 34.52 percent of Mississippi was in the first drought stage. The report dated Sept. 10 did not have any portion of the state included drought.

To compare, the report from the same time last year, had just 17 percent of the state in any kind of drought conditions.

So far this year, the National Weather Service has recorded 46.38 inches of rainfall through Monday. The average amount for this time of the year is 38.84 inches.

Tim Reeves, editor of The Vicksburg Post, contributed to this report.