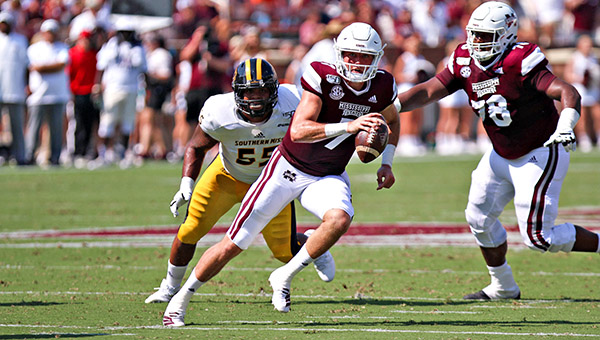 Mississippi State quarterback Tommy Stevens runs with the football against Southern Miss. Stevens was injured in that game three weeks ago and did not play last week against Kentucky. His status for Saturday’s game at Auburn is questionable. (Walter Frazier/For The Vicksburg Post)

JACKSON (AP) — Ole Miss and Mississippi State are both dealing with injury-related quarterback uncertainty as they prepare for road tests with top-10 teams this week.

Ole Miss’ Matt Corral was knocked out of a 28-20 loss to No. 15 California last week with bruised ribs, while Mississippi State’s Tommy Stevens didn’t play at all in a 28-13 victory over Kentucky due to an unspecified upper-body injury.

“It is a fluid situation,” Mississippi State coach Joe Moorhead said.
Moorhead said Stevens would practice in some capacity on Tuesday and added that “we just have to see where it goes” from there. Ole Miss coach Matt Luke described Corral’s status as “day to day.”

“He was out there yesterday, didn’t do a whole lot,” Luke said at his Monday news conference. “He’ll be out there tomorrow, and we’ll know more after practice tomorrow.”

Both teams have reason to feel good about their backup plans if the starters aren’t available.

Mississippi State’s Garrett Shrader was named the SEC freshman of the week after making his first career start in place of Stevens last week. Shrader went 17-of-22 for 180 yards and an interception while also rushing for 125 yards on 11 carries against Kentucky.

Ole Miss freshman John Rhys Plumlee replaced an injured Corral in the fourth quarter with Ole Miss trailing Cal 28-13. His 47-yard run set up a touchdown that cut the margin to 28-20. Plumlee then drove Ole Miss 89 yards in the closing minutes before he was stuffed on a quarterback sneak attempt from the 1-yard line as time expired.

“He brought a spark into the stadium and on the sideline,” Luke said. “Moving forward, what he can bring with his legs, especially against a really good defense, I think that addition gives (opponents) something else to prepare for. Because Matt and John Rhys are so different, they have to go into the game preparing for both. Again, you hope that Matt is healthy and they have to prepare for both of them. That is the goal, to get them healthy and have both of them available.”

Mississippi State also is wondering whether it will have all its quarterbacks available this week.

Injuries forced Stevens to leave early in a victory over Southern Miss and a loss to No. 24 Kansas State before he sat out the entire Kentucky game.

Moorhead said Shrader would start again Saturday if Stevens is unable to go.

While Mississippi State measures Stevens’ progress, Ole Miss is checking to see whether Corral will be ready to go against Alabama. Luke said Corral was “pretty sore” on Sunday but started “feeling a little bit better” on Monday.

Corral has completed 59.7 percent of his passes for 844 yards with four touchdown passes and one interception this season.

“You have to see how he progresses, how confident he is in the injury, and can he do everything,” Luke said. “Can he pull it and run it? How is he? Again, you are going with the guys you think will help you win the football game, and I don’t think you can make that call until you see him go out there at practice.”