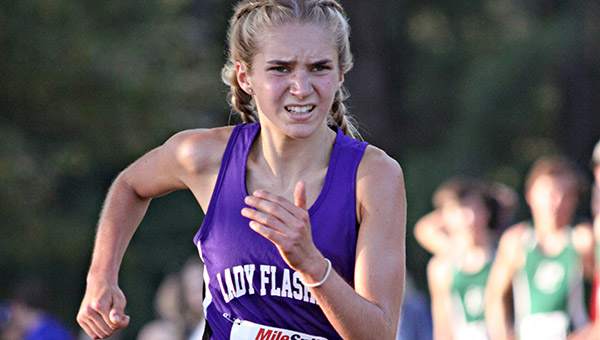 A week after a strong second-place finish, Rachel Garmon topped herself the only way she could — by winning.

The St. Aloysius junior zipped through the 5-kilometer course in 20 minutes, 43.51 seconds to blow away the field at the MRA Cross Country Invitational Monday in Clinton. Garmon finished 34 seconds ahead of runner-up Lydia Snopek of Madison-Ridgeland Academy.

St. Al finished eighth in the team standings on Monday. After Garmon, its next-highest finishers were Nancy Clement in 31st place, Julia Tuminello in 43rdh, and Linley Miles in 59th. The Lady Flashes finished with 89 points.

Madison-Ridgeland Academy won the team title, with 58 points. All five of its runners were in the top 10, including Snopek in second with a time of 21:17 and Everett Heard in third in 21:23.

A total of 180 runners and 16 teams competed in the girls’ meet.

In the boys’ 5K, St. Al’s Tommy Martin finished 14th with a time of 19:07 to help the Flashes to a seventh-place team finish.

Walker Lambiotte finished in 70th place, Brayden Roesch in 75th and Logan Johnson in 77th. A total of 240 runners and 26 teams competed in the boys’ meet.

Kirk Academy’s Chase Rose won the individual title with a time of 16:40. Presbyterian Christian’s Jacob Williams was second in 16:55, and was joined in the top 10 by teammates Jackson McGee (fourth place) and Nathan Marcev (10th place) to lead the Bobcats to the team championship with 39 points.

Jackson Academy was second, with 94 points, and Cathedral was third with 100. St. Al totaled 262 points.