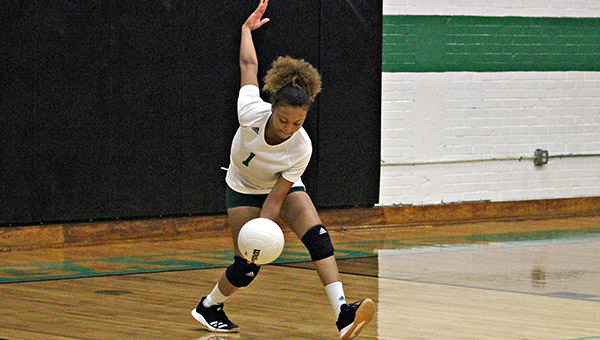 “Success” and “Vicksburg High volleyball” are two terms that have not exactly been synonymous over the years.

The program that was started in 2011 has had one .500 season and seven losing ones. The team won one match from 2016-18, and the rare victories have been treated as major events.

That is all changing this season.

The Missy Gators beat Forest Hill 3-0 (25-11, 25-14, 25-8) on Tuesday to improve their record to 7-3. They’re not only closing in on the first winning record in school history, but are two wins away from the first region championship as well.

Tuesday’s victory improved the Missy Gators’ record in Region 6-5A to 2-0, and they need only beat Forest Hill and Wingfield one more time each to clinch the title and earn a home playoff match.

“We’ve learned over the years from all the losses, and you don’t want to lose. Vicksburg already has a bad reputation for sports, and you want to build Vicksburg up. Get everybody all together. It’s going to be a good season and I can’t wait to finish,” senior Haleigh Erwin said.

The Missy Gators can tie the school record for wins by winning their next match, Thursday at home at 6 p.m. against Port Gibson. Two more wins will clinch a winning record. Erwin said team chemistry, on and off the court, has been a key to the team’s turnaround this season.

“It’s real fun. I’ve been playing since ninth grade, and it’s real fun to be around when you’ve got all your friends with you and all the chemistry on the team,” Erwin said. “This is my first winning season for volleyball. It’s really encouraging and really fun to be around them, and I’m glad we’re winning. And we have fun winning and everything we do, from bus rides even to arguments, going to get food, all of this stuff.”

The match against Forest Hill wasn’t fun at first for the Missy Gators, but soon turned into a laugher. After falling behind 9-6 in the first set, Janih Wright served for seven straight points and Vicksburg never trailed again in the set. It won 19 of the last 24 points to win 25-11.

The second set featured a similar run, as the Missy Gators won eight points in a row to take a 20-13 lead before closing it out and winning 25-14.

Katelyn Fisher started the final set with an ace, and the Missy Gators won 13 of the final 14 points to win 25-8.

“I always tell them, ‘Go to the Gap and shop for the sale.’ They kept hitting to the back corner because it was wide open,” VHS coach Deborah Brown said.