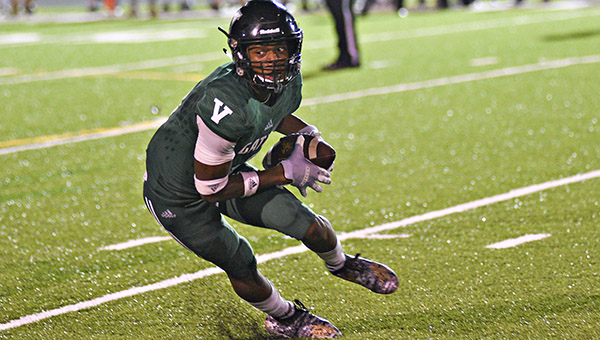 There’s an old football adage about throwing the records out when league play begins, and everybody is once again 0-0.

For Vicksburg High, it rings truer than most.

The Gators head into Friday’s Region 2-5A opener against Provine with a 1-3 record that isn’t very impressive at first glance, but not as bad as it looks upon closer examination. The three losses were to Madison Central — the top-ranked team in Mississippi — Class 6A Warren Central, and Louisiana Class 5A contender Benton.

Given what they’ve seen so far, Vicksburg coach Tim Hughes is far from discouraged as he sizes up the potential for his team to make a run at the region championship.

“I think it’s all up for grabs,” Hughes said. “Let’s not talk about history of programs, let’s just talk about records. Our records, their records against teams we’re playing. In general, there’s not one that is sticking out like, ‘Whoa.’ If you’re talking playoffs, it’s up for grabs one through four.”

Two of the four remaining unbeaten teams in Class 5A are in Region 2-5A — Provine (5-0) and Canton (4-0) — but none are ranked in the top five of this week’s Associated Press Class 5A poll.

Hughes believes few of the Region 2-5A teams have faced the kind of schedule his squad has, but did acknowledge that some of them have found ways to win games where the Gators have not.

Provine rallied in the fourth quarter to beat Forest Hill 55-47 in double overtime last week. The Rams have also had a few easy wins — three by 20 points or more — and gutted out an ugly 15-6 victory over Columbus in the season opener.

“You look at Provine, and the impressive thing is when you’re 4-0 or 5-0 you know how to win,” Hughes said. “They won in overtime the other night. They know how to get wins, regardless of who they’re playing. They’re doing what they’re supposed to do.”

In its last game, Vicksburg scored 21 points in the last 6:11 to force overtime against Benton, but lost 49-48 on a botched PAT in the extra period.

The loss to Benton sent the Gators into their bye week on a strange high. They were obviously disappointed with the loss, but also had the feeling they’d turned a corner in terms of attitude and effort.

“It’s as acceptable of a loss as you can have. It’s still a loss. When you know how to win, you find a way to win. When it’s all said and done we walked away 1-3 instead of 2-2. That, we’re still having to achieve,” Hughes said. “But the competitive nature we showed was that there is no such thing as too big of a hole. If there was, that game could have been it. We still came up and got to a point where we were overachieving at the end of the game. Now we want to put together a game where we’re overachieving from the first quarter on. Let’s not wait until one particular time.”

Another positive for the Gators was a breakout performance by quarterback Sha’Kori Ragan. The senior, who is playing quarterback for the first time this season, finished with 342 total yards and five touchdowns. He was 15-of-28 passing for 184 yards and two TDs, and ran for 158 yards and three touchdowns on 25 carries.

Ragan spearheaded the comeback by throwing or running with the ball on 21 consecutive plays from late in the third quarter through overtime.

Hughes said the Gators’ coaching staff had been taking it slow with Ragan while he acclimated to a new position. His performance against Benton, however, showed they might be able to loosen the reins and open up the offense more in the second half of the season.

“One of the things it showed me is we can take the kid gloves off. We’ve been doing some things with him, not because of his ability or lack of, but just experience-wise,” Hughes said. “You don’t want to make it too big for him to where it can be overwhelming. Coming out of that game, I don’t know that there can be a situation that is too overwhelming.”