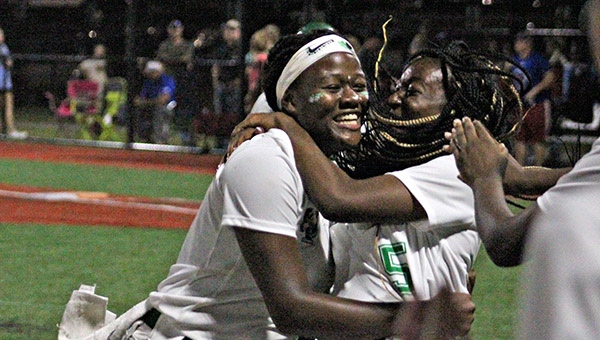 Ten minutes after they’d beaten Warren Central in extra innings on Thursday night, the Missy Gators abruptly stopped celebrating and even talking as coach Brian Ellis walked across the diamond toward them.

Ellis took five or six steps as silent tension filled the air. Finally, unable to hold it in anymore, he smiled, threw both arms in the air, and ignited a second celebration.
Jazmine Miller’s RBI single in the bottom of the ninth inning gave the Missy Gators a 6-5 victory over their crosstown rival, as well as the MHSAA Class II, Region 5 slow-pitch softball championship.

It’s the first time in Ellis’ seven seasons at Vicksburg that it has won a region championship in either slow- or fast-pitch softball.

“It’s tremendous, and to be able to do it against Warren Central and in a game like that, an atmosphere like we had,” Ellis said. “Both sides battled and they left it out on the field. It’s a very big win for us. We didn’t think about (the tiebreaker). It was just ‘win the ballgame.’”

Warren Central had beaten Vicksburg 7-6 last week — coincidentally, also in nine innings — so Vicksburg’s win on Thursday not only evened the season series but the run differential between the teams that is the first head-to-head tiebreaker.

Ellis, Warren Central coach Dana McGivney and Vicksburg Warren School District athletic director Preston Nailor huddled for a postgame conference as players from both teams milled around on the field. They first had to figure out what the next tiebreaker was, and then deduce who had won it.

The region championship ultimately was settled by the fourth tiebreaker of run differential against the third-place team. Vicksburg had beaten Raymond by a total of 17 runs in two games, while Warren Central only had a 14-run advantage.

“Last year I worried about it and looked at all the tiebreaks when the shoe was on the other foot, and we blew it in the sixth inning. This year I looked at it, but I didn’t look at it a lot. My deal was to say let’s go win a ballgame,” Ellis said. “We not only set a goal to win a district, we set a goal to go far and play for South State or state. The girls are starting to believe that they can play, and we’re just going to keep winning.”

As the region champion, Vicksburg will get a bye in the first round of the Class II playoffs and will host a first-round series on Oct. 8. Class II includes teams in Classes 4A, 5A and 6A in most other sports.

Warren Central will host Richland in a best-of-three series in the first round on Oct. 5. All three games of that series will be played in one day at Halls Ferry Park.

“It may be a little better (draw), but either way it’s a tough row to hoe. I feel like in the South there’s a lot of good teams and competition, and day in and day out it depends on who shows up. If we play like we did tonight then I feel like we’ve got a shot at making a run,” McGivney said.

Warren Central could have won the region title with a victory Thursday, or Vicksburg could have won it without the need for advanced math by winning by two runs or more. Both had some opportunities to do so.

Warren Central let a 5-2 lead slip away in the sixth inning. Vicksburg’s Lili Kistler hit a two-run single and Viijae Flaggs hit an RBI double down the right field line to tie it.

The Lady Vikes then had a runner thrown out at third to end the seventh inning, and hit into a line drive double play with the bases loaded to finish a big threat in the eighth.

Vicksburg, meanwhile, could still have won by two in extra innings with a walk-off home run with runners on base. Miller had homered in the second inning. McGivney elected to intentionally walk Sha’Niya Lockridge and Miller, the Missy Gators’ two biggest home run threats, to load the bases with one out in the seventh inning. That gamble paid off when the next two batters grounded out, with one runner thrown out at home and the other at third.

Lockridge was on deck with two runners on and two outs in the eighth, but Jamie Ward flied out to end the inning.

That meant, however, that Lockridge led off the ninth and the Lady Vikes issued another intentional walk. Kistler followed with a single and Miller came to the plate again. This time, McGivney decided to pitch to her.

“At that point there was no outs, so even if I load the bases then we’ve got to make three plays in a row. One hit to the outfield is the same result,” McGivney said, before adding with a smile, “But I did think about it.”

Miller, Vicksburg’s only senior, took full advantage of the opportunity. She lifted a fly ball down the right field line that fell in for a hit. Lockridge hustled around third base and scored easily to give the Missy Gators a 6-5 victory.

“It was really good. We’ve been waiting on this game. We’ve been cooling off all day, no bad energy, so I’m really glad about it,” Miller said. “I thought they were (going to issue a walk). Good thing they didn’t.”