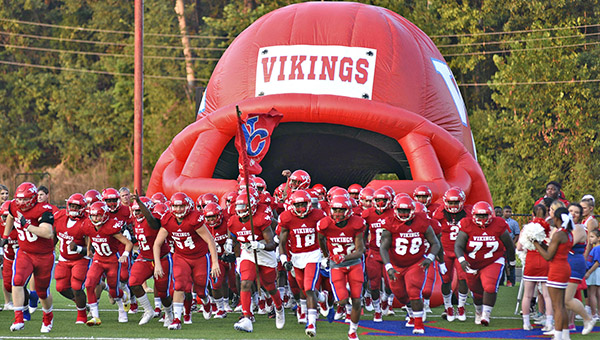 The Warren Central football team leaves the tunnel before a game earlier this season. The Vikings will go on the road to play Germantown in their Region 2-6A opener on Friday night. (Courtland Wells/The Vicksburg Post)

For years, the third or fourth Friday in September has been one of the most important in Warren Central’s football season.

The date floated, depending on the year and when the season started, but it was the night the Vikings played Northwest Rankin. It was the first of seven Region 2-6A games, but as a matchup between playoff contenders it always carried more weight than an ordinary game.

With Northwest Rankin moved out of the region in the last wave of MHSAA realignment, the opponent has changed for Warren Central. The importance of the game has not.

The Vikings (2-2) will go on the road Friday night to play Germantown (3-1) in a game pitting two of six likely contenders for four Region 2-6A playoff spots. It’s a game that will not only give the winner a crucial head-to-head tiebreaker in the playoff race, but set the path both of them will have to navigate as the region schedule unfolds.

“You’re playing a playoff team, and it’s the first one. This game is going to carry weight for what we’re doing in November, and it’s late September. It’s a very pivotal game,” Warren Central coach Josh Morgan said. “The outcome of this game can set you up or put you behind the 8-ball. Immediately.”

This is the first time Warren Central and Germantown have ever played each other in football. Germantown opened in 2011 as a Class 4A school, moved up to Class 5A in 2013, and is now in its first season as a Class 6A team.

While the Mavericks are newcomers to the state’s largest classification, they are no strangers to success. They have won at least seven games in every season except 2011 and won region championships in 2012 and 2016.

That pedigree established them immediately as a playoff contender in the highly competitive Region 2-6A, which includes three of the top four teams in this week’s Associated Press Class 6A poll.

“They’re a good football team. They do a good job schematic-wise, have a ball control offense, and are well-coached in all three phases. It’s going to be a big challenge for us,” Morgan said. “They’re a bad snap away from being 4-0. They do a really good job of taking care of the football, and don’t make mistakes.”

Warren Central is also a good football team, albeit one that’s still finding its identity.

The Vikings hit their bye week at 2-2 after a tough 10-9 loss at No. 5 Brandon two weeks ago. They also beat a solid Holmes County Central team in the Red Carpet Bowl, were blown out by No. 2 Pearl, and earned an equally lopsided win over Vicksburg for a mixed bag of results in the first month of the season.

Morgan grimaced when reminded of the Brandon loss — the Vikings allowed a defensive touchdown, missed two field goals and a PAT, and had their final drive thwarted by a fumble — but said overall he was pleased with how the season has gone thus far.

“We’ve had a good non-district. I’m pleased with where we’re sitting at,” Morgan said. “We’ve seen a lot. We’ve had four different kinds of games. We watched our team progress and we’ve got to continue to do that.”

Friday’s game was set to be a duel between two of Mississippi’s best running backs. Germantown’s Nick Barnes has rushed for 479 yards and 12 touchdowns this season, while Warren Central’s Jerrious Stovall had 185 yards and two TDs in the team’s first three games.

Stovall, however, will not be on the field. He suffered a sprained ankle in Week 3 against Vicksburg, did not play against Brandon, and will be out again for the region opener. Stovall posted a picture of himself in a walking boot on Twitter on Monday.

Morgan said he expects Stovall — who has 1,842 yards and 22 touchdowns in two-plus seasons — to be back this season, and called his injury week-to-week. For now, though, the Vikings will have to make do without their leading rusher and biggest offensive weapon.

In Stovall’s absence, junior Kentrick Thompson (28 carries, 102 yards, one touchdown) and senior Malik Sims (15 carries, 107 yards, one TD) appear to be in line for a heavier workload.

More will also fall on the shoulders of senior quarterback Parker Kivett, who was 11-of-17 passing for 247 yards and one touchdown against Brandon. Kivett has completed 70.7 percent of his passes in the last three games.

“We’re just plugging and will continue to plug in who we can,” Morgan said. “It truly is next man up. Coach Rob (Morgan, WC’s offensive coordinator) has done an outstanding job finding a way to be productive, and we’ll get a back by committee going as we’re still progressing.”