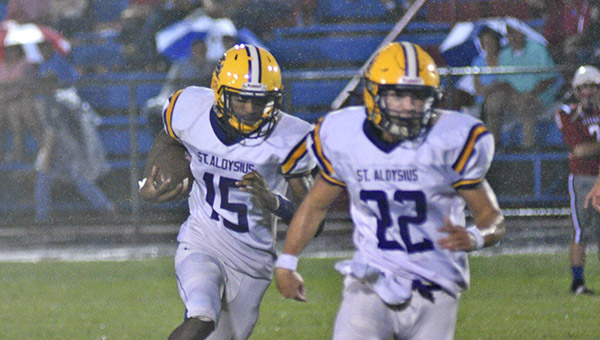 When it’s all over and edited together, the highlight video of St. Aloysius’ next three games will feel like a remake of the movie “Inception.”

St. Al (2-3, 1-0 District 3-5A) faces Copiah Academy (2-3, 1-1) in the first of three consecutive district games Friday night at Balzli Field. The three-week stretch is a season within a season that will determine whether the Flashes head into the MAIS Class 5A playoffs as a district champion, as a wild card, or perhaps not at all.

Twelve of the 17 teams in Class 5A qualify for the postseason. Three district champions receive automatic berths, and nine others are wild cards based on power points. St. Al and Copiah are currently tied for 10th in the power points rankings, meaning the winner of this game keeps its district title hopes alive and gets a leg up in the wild card race.

“It’s very important. The preseason is over. It’s time to get down to business now. If it hadn’t been serious before, it’s time to get serious now,” St. Al coach Michael Fields said. “We try not to put too much emphasis on it. In case something does go wrong we don’t want to think it’s the end of the world. But we’re definitely going to put some importance on it.”

St. Al is not at full strength heading into this key stretch of the season. Senior lineman Carrington Busari was already out for the year with a torn ACL, and quarterback Phillip Upshaw missed last week’s 36-15 loss at Riverfield Academy with a back injury.
Fields said Upshaw is day-to-day and wasn’t sure whether he would play against Copiah. His absence has a major effect on St. Al’s offense.

With Upshaw in the lineup, the Flashes have a passing threat as well as a two-pronged rushing attack with him and running back Alvin Brown. St. Al has only thrown 47 passes this season, but Upshaw has 206 rushing yards and Brown has 571 and four touchdowns.

Without Upshaw, Brown moves to quarterback and takes away some of the team’s offensive versatility. Brown can throw the ball but is much more effective as a runner and receiver, and the net result is to turn the Flashes into a one-dimensional offense. In the loss to Riverfield, Brown was 5-of-8 passing for 26 yards and ran for 111 yards and a touchdown.

“We can move Alvin around when Phillip is there. He’s our best receiver, too, and we move him outside a lot. At least now we have time to plan something,” Fields said. “The good thing is, we were one-dimensional and we still moved the ball when we had it. The big thing that hurt us was the turnovers.”

St. Al fumbled eight times and lost two against Riverfield. The game was played in steady rain, with occasional heavy downpours, and was the first time this season the Flashes had seen anything other than dry conditions.

“It’s nothing to worry about. We’ll be more prepared now. Now we know not to be surprised by anything,” Fields said.

The bigger concern is depth, which Copiah has an advantage in. The Colonels have 46 players on the roster compared to 30 for St. Al. Along with injuries, Fields said it’s becoming a factor for the Flashes.

“It was a big factor last week. But we got a chance to play a few more kids. It’s like being a mad scientist, putting the pieces together and seeing where they fit best,” Fields said. “Depth is a factor (against Copiah). They’ve got 40 or 50 players. They’ve got size and they’re used to playing tough competition because they were in an upper classification before this year. I think the game is 50-50. We go in and play hard, we can win.”