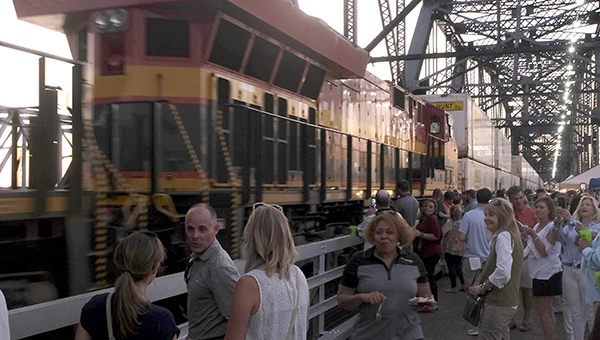 A train passes by during Thursday's Supper on the 'Sip on the Old Vicksburg Bridge. (Courtland Wells/The Vicksburg Post)

Although the temperature was toasty Thursday, it did not in any way hinder the second annual Supper on the ‘Sip.

The event, which is the fundraising kickoff for the United Way of West Central Mississippi, was well received by the community and even impressed out-of-towners who attended.

“I think this is a great event and the food has been delicious,” Clinton resident Donna Jacobs said.

“I love it,” Alabama resident John Mitchell said of the fundraiser.

“My son’s girlfriend told us about it, and we wanted to come up here and experience it, and if they do it again, we are coming back next year,” Mitchell said.

After the success of last year’s event, United Way of West Central Mississippi officials said they were able to increase the number of tickets sold, from 500 to 850.

The number of vendors who participated this year also increased, United Way director of Marketing and Community Relations Kami May said.

“We had 22 (vendors) including drink stations,” May said.

“One hundred percent of all funds raised through ticket sales will go to our 18 partner agencies,” Connelly said. As of Thursday evening, the total money raised from ticket sales was approximately $30,000.

Connelly said that in addition to raising money for the United Way partners, “Supper on the ‘Sip is an amazing opportunity for the community to come together as a whole and celebrate our great community and strengthen what we already have as a strong community.”

Community is why Vicksburg residents Dale and Donna Jacobs attended the event.

“We wanted to come out because it’s a new experience and also because of the camaraderie, and the chance to see old friends,” Dale said.

Ali Hopson, who served as co-chairman of the committee that organized Supper on the ‘Sip, said preparations for the event worked like a “well-oiled machine.”

“It’s just been wonderful. Having all these restaurants get involved, and all the volunteers that have come out, helped make this event succeed,” Hopson said. “And there has also been a wonderful response from our community.”

Both Hopson and May said the second time around was more organized than the inaugural event.

“It’s a lot more organized this year,” Hopson said. “The (Warren County Bridge Commission) has been fabulous, and the set-ups were a lot smoother this year.”

“It’s been completely different from last year,” May added. “We were better prepared. We knew what to expect and this year the sun was out.”

“I just wonder why we don’t do this more often,” Vicksburg resident Jason McKenna said. “To come out and watch the beautiful sunset over the water. It’s kind of what Mississippi is all about.