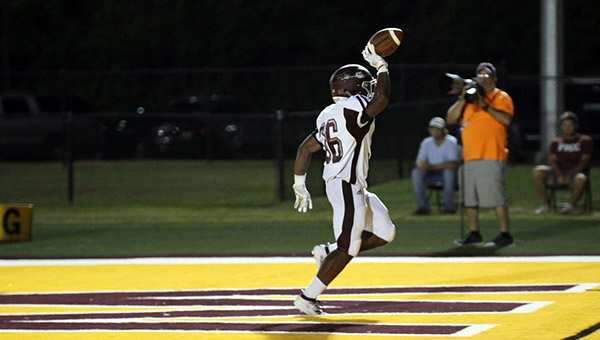 POPLARVILLE — Right from the opening kickoff, explosive plays were the theme of the evening for Hinds Community College on Thursday.

No. 16 Hinds scored six touchdowns of 40 yards or longer, and had a few other big plays that set up shorter scores, as it routed Pearl River Community College 51-9.

Ferante Cowart returned the opening kickoff 90 yards for a touchdown, and also had a 73-yard punt return to set up a touchdown in the third quarter.

Former Warren Central star Joe’Vantae Shorter had an 82-yard TD reception in the first quarter as Hinds jumped out to a 38-3 lead by halftime.

“We were finally able to get the passing game going and our guys made some big time plays,” Hinds offensive coordinator Kelly Murphy said. “It just opens everything up for us, and we need to continue to build upon this momentum the rest of the season.”

Don Ragsdale ran for 95 yards, most of it on an 80-yard touchdown. Elijah Walker threw two touchdown passes, the one to Shorter and a 49-yarder to Tabashi Thomas. Walker finished 5-for-5 passing for 186 yards.

Hinds’ defense even got in on the act by scoring twice. DeMario Nichols returned an interception 41 yards to the end zone, and Jonathan Jordan took another pick 59 yards for a TD.

Next up for Hinds will be Coahoma Community College. The homecoming game is scheduled for Oct. 3 at 7 p.m. in Raymond.

The Bulldogs scored 21 straight points in the second half to turn a nine-point deficit into a 33-21 lead, and then held serve down the stretch as the teams traded touchdowns.
Northwest Mississippi quarterback Jack Walker completed 25 of 40 passes for 398 yards and six touchdowns. Braden Smith and Cameron Wynn caught two TD passes each.

Walker was only the third Northwest quarterback to throw six touchdown passes in a game, and the first to do it since 2002.

Northwest will play No. 5 East Mississippi next Thursday in Scooba.

Jackie Matthews had two first-half interceptions, including a pick-six that sparked Gulf Coast to a 24-0 lead.

Itawamba quarterback Clark Mills threw a 2-yard touchdown pass to Collins Woods with 18 seconds left, but the two-point conversion was no good.