Shoops arrested, charged with arson in connection to apartment fires 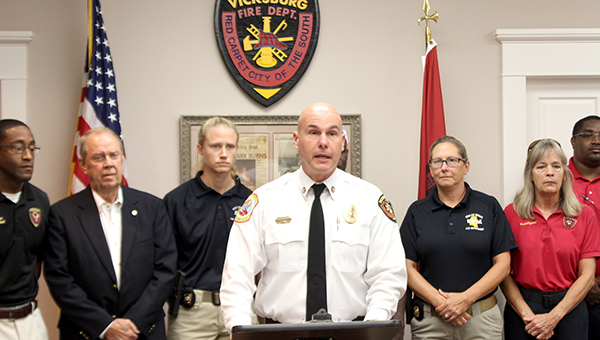 Bond has been set at $50,000 for Larry Jack Shoops, who is accused of starting two fires at the former Confederate Ridge Apartments, 780 U.S. 61 North.

The Warren County Sheriff’s Office and the Mississippi State Fire Marshal’s office were represented at the initial appearance.

Shoops is accused of burning down the lower pool house and attempting to burn down building number 20 at the vacant apartment complex Tuesday. The abandoned complex has been under development as the Park Avenue Condominiums.

Vicksburg fire investigator Nathaniel Williams said a K-9 from the Fire Marshal’s office detected the odor of a possible accelerant, or chemical used to start the fire. He said the evidence was sent to the state Crime Lab for analysis.

Danczyk said multiple witnesses, including Warren County Sheriff Martin Pace, saw Shoops in the area at the time of the fire.

“Shoops has been a suspect in previous fires at this property in 2016 and 2017,” Danczyk said. The motive for the fires, he said, was undetermined, adding Shoops had once been a resident at the apartment complex.

“We believe all these fires are tied together with Mr. Larry Shoops,” Danczyk said. “I want to thank all the partner agencies that assisted the Vicksburg Fire Department on making this a successful investigation.”

Formerly known as the Confederate Ridge Apartments, the complex at one time was one of the premier apartment complexes in the city, but fell into disrepair and attracted an undesirable group of tenants and outsiders who came either as visitors or trespassers and sat outside buildings.

The 152-unit apartment complex was acquired by Whispering Woods LLC, a Delaware-based holding company with offices in Florida, in February 2013 at a foreclosure sale, and the company began making attempts to improve the complex’s image, including getting three of its 19 buildings off the city’s condemnation list.

The complex fell in disrepair, and the Board of Mayor and Aldermen in 2016 condemned 37 units at the complex. In 2017, the board put the complex under the city’s slum clearance ordinance.

The property was purchased in August 2017 by Beverly Hills, California-based Rockwell Building and Design and World Trade & Exchange Holdings of New York with plans to convert the apartments into condominiums.