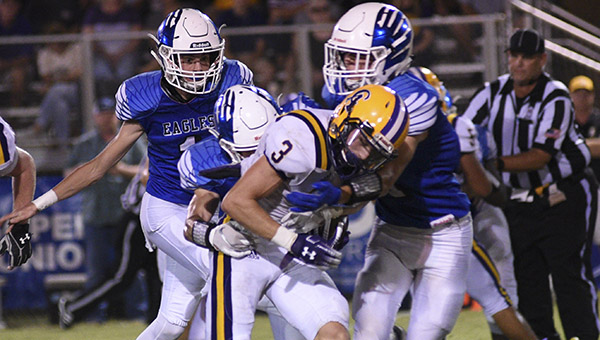 Porter’s Chapel Academy was hanging in against Centreville Academy, not necessarily close on the scoreboard but not far enough away to give up hope.

Until, very suddenly, they were.

Centreville scored two touchdowns in the last six minutes of the first half Friday night to blow open a fairly competitive game, and went on to beat PCA 44-6.
The two quick touchdowns turned a 16-0 lead for Centreville (3-3) into a 30-0 advantage at halftime.

“I thought our effort was great. We were overmatched, but playing hard in the trenches and in the run game,” PCA coach Blake Purvis said. “Then in a couple of plays, to go from a two-possession game to a five-possession game it takes the wind out of your sails.”

PCA (1-5) lost its second game in a row, but did have some bright spots. It rushed for 173 yards despite the absence of starting quarterback Luke Yocum, who is likely out for the season with a broken collarbone.

John Michael Wilkerson led the Eagles with 104 yards and a touchdown on 13 carries, and Tyler Washington had 53 yards on 13 carries. Wilkerson broke off a 60-yard touchdown run in the fourth quarter.

“I thought our run defense was pretty solid. Facing a team that runs as well as they do, we executed well,” Purvis said. “We gave up some plays in the passing game in man-to-man coverage. It wasn’t busted coverages or anything like that. (Centreville) made some plays.”