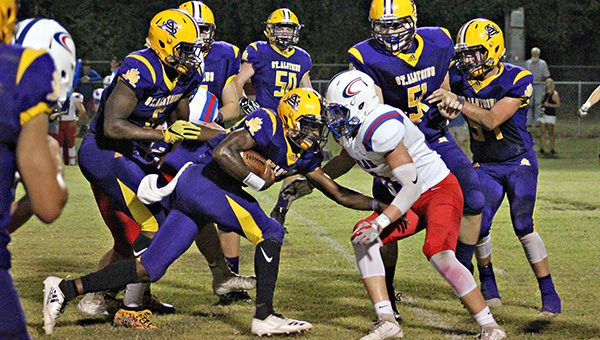 For a couple of weeks now, St. Aloysius coach Michael Fields has been wanting to throw the ball a little bit more. On Friday, the Flashes aired it out and pretty well ventilated Copiah Academy.

St. Al also scored on a 29-yard reverse pass from wide receiver Kieran Theriot to Thomas Phillips in the third quarter. Its 214 total passing yards were more than it had in the first five games combined this season.

“A little bit more work at practice, a little bit more getting used to each other. The linemen stayed in their blocks a little bit longer so we have time. And guys caught the ball pretty well tonight. Everybody did their job, and that’s basically what we look for,” Fields said.

Besides showing another dimension to the offense, the win was a big one for the Flashes (3-3, 2-0 District 3-5A) in the standings. It kept them unbeaten in District 3-5A and tied for first place with two more district games ahead in the next two weeks.

St. Al will travel to Silliman next Friday, and Adams County Christian on Oct. 11. Silliman beat ACCS 26-0 on Friday.

“You saw tonight what we can do if we stay focused and don’t make mistakes. Still we made mistakes tonight that cost us early, but this time of year we usually get better as we go. If the kids just stay focused, I think we’ve got a chance,” Fields said. “Nobody wants to make the playoffs and have to go to Heritage or Pillow. We want to be at home. So let’s win as many as we can so we can be at home.”

St. Al’s first play on Friday was a deep pass from Brown for Brennan Williams. Brown overthrew the receiver who was about 35 yards down the field, but the tone was set.
On the Flashes’ second series of the game, Brown went 3-for-3 for 46 yards and capped things off with a 26-yard touchdown pass to Theriot. Theriot caught the ball on a crossing route around the 15-yard line and broke two tackles on his way to the end zone.

Later in the first half, St. Al stretched its lead to 9-0 when James Davis tackled Copiah’s John David Weed in the end zone for a safety. On the ensuing drive, Brown completed a 22-yard pass to his brother Trinye Brown and a 31-yarder to Theriot on back-to-back plays to set himself up for a 10-yard TD run with 1:16 left in the second quarter.

“When I was seeing some open spots I hit it and made some plays down the field. I did what I had to do,” Alvin Brown said. “It was fun. I was throwing darts all night. I was just hitting the open man.”

The passing continued after halftime. St. Al recovered Copiah’s onside kick to start the half and, three plays later, the Brown brothers hooked up again for a 27-yard touchdown. After Copiah went three-and-out, the Flashes scored on Theriot’s 29-yard pass to Phillips for a 28-0 lead with 7:27 left in the third quarter.

Weed scored on a 2-yard run in the third quarter for Copiah (2-4, 1-2) and Alvin Brown on a 5-yard run early in the fourth for St. Al to finish out the scoring.

Weed finished with 78 yards and a touchdown on 16 carries for Copiah.

The Colonels only threw one pass in the first half, but put it in the air on 23 of 32 snaps in the second half. Freshman quarterback Ben Adams finished 9-of-20 passing for 77 yards, with no touchdowns and one interception.

“I’m just happy. It feels better to be in the lead than coming from behind,” Fields said. “You could see the encouragement and the confidence in their faces as the time was going, and the second group came in and got a couple of first downs to keep the ball. Success breeds success, and that’s the bottom line.”