PCA one win away from reaching softball state finals 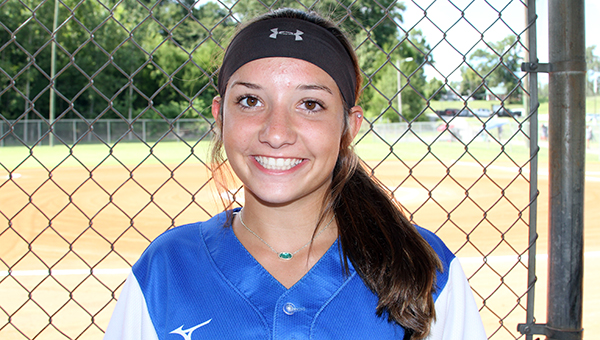 Porter's Chapel Academy's Carlyle Smith went 4-for-4 with three doubles, four RBIs and three runs scored in a 16-0 victory over Lee (Ark.) in the MAIS Class 2A state tournament on Saturday.

Porter’s Chapel Academy breezed through the first leg of the MAIS Class 2A softball tournament on Saturday, and is now one win away from playing for a state championship.

PCA beat Lee Academy (Ark.) 16-0, and Tunica Academy 8-2 on Saturday to advance to the winners’ bracket final Monday at the Magee Sportsplex in Magee.

PCA (22-8) will play Glenbrook Monday at noon for a spot in the best-of-three championship series that begins later in the week.

The other team in the championship series will be the one that comes out of the state tournament’s losers’ bracket. The PCA-Glenbrook loser will drop into that bracket, and can still advance to the finals by winning another game later Monday.

Porter’s Chapel, for right now at least, has established itself as the team to beat. The Lady Eagles ran their winning streak to 12 games in a row with Saturday’s victories and have outscored their opponents 59-3 in six postseason games so far.

In the first game Saturday, against Lee Academy, the Lady Eagles had 13 hits and scored in all four innings before the mercy rule ended the game.

The first three batters in the order ­— Jenn Smith, Carlyle Smith and Hannah Embry — were a combined 10-for-12 with seven RBIs and nine runs scored.

Embry also pitched four innings of shutout ball before Abby Morgan finished up in the fifth. Embry allowed one hit and no walks, and struck out nine batters.

In the second game, against Tunica Academy, PCA scored three runs in the bottom of the first inning and never looked back on the way to the 8-2 victory.

Jenn Smith went 2-for-3 and scored three runs, while Embry was 3-for-3 with three RBIs. Katie Tillman also had two hits, including an RBI single in the third inning, and Brittnee Martin was 2-for-3 with a run scored.

Embry was again dominant in the circle. She struck out 16 batters in seven innings, and gave up two unearned runs in the sixth inning. She allowed one hit and walked four.