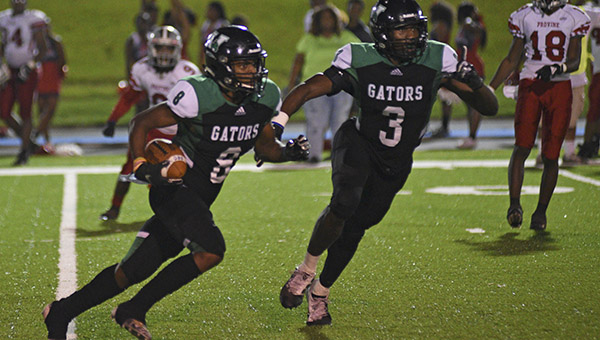 The Vicksburg Gators have played two games this season on their new artificial turf field at Memorial Stadium.

Both of them have been memorable for the wrong reasons.

Deion Smith caught two long touchdown passes in the final six minutes Friday night as Provine beat the Gators 27-19 in the Region 2-5A opener for both teams.

Smith caught a 35-yard TD pass from Shavario Allen to give the Rams the lead, and then an 85-yarder with a little more than three minutes left to seal it. He caught another touchdown pass in the first half to finish with three in the game.

The tough loss for the Gators (1-4, 0-1 Region 2-5A) came two weeks after they rallied from a 21-point deficit in the fourth quarter against Benton, La., before losing 49-48 in overtime.

Cedric Phillips rushed for 150 yards on only eight carries for Vicksburg on Friday night. Nearly half of it came on a 71-yard touchdown run in the first half.

Sha’Kori Ragan was 15-of-26 passing for 149 yards and two touchdowns, and also threw two interceptions. He threw a 10-yard touchdown pass to Keveon Smith and a 6-yarder to Deandre McCalpin in the second half to put the Gators ahead 19-14 early in the fourth quarter, before Provine (6-0, 1-0) rallied for the win.

After Deion Smith’s 35-yard TD reception put Provine back in front, Vicksburg drove to the 5-yard line and was stopped on downs with 3:50 remaining. On second-and-6, rather than trying to milk the clock or force the Gators to use their timeouts, Allen threw another deep ball to Smith for an 85-yard TD that made it 27-19.

Keveon Smith finished with six receptions for 61 yards and one touchdown, and McCalpin had six catches for 79 yards and a touchdown for Vicksburg.

Vicksburg will go on the road next week to play Neshoba Central.