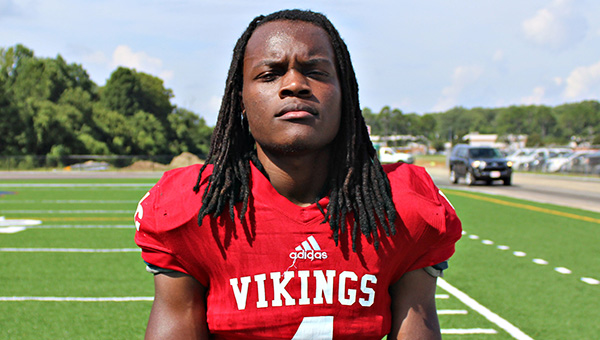 Warren Central running back Antonio Thomas ran for one touchdown and caught a TD pass in a 35-14 win over Germantown on Friday.

Warren Central went on the road to unfamiliar territory on Friday and came home with a big prize.

Antonio Thomas scored two touchdowns, and the Vikings scored 35 straight points after falling behind early to beat Germantown 35-14 in their Region 2-6A opener.

Kentrick Thompson, Malik Sims and Parker Kivett all ran for touchdowns for the Vikings (3-2, 1-0 Region 2-6A), who were without leading rusher Jerrious Stovall. The senior missed his second game in a row with a sprained ankle.

The win over one of five other likely playoff contenders in Region 2-6A was a huge lift for Warren Central. It not only provided a shot of confidence, but allowed the Vikings to play from ahead in the standings as they face a murderer’s row of opponents in October.

Warren Central will play three teams ranked in the top five of the Associated Press Class 6A poll in a five-week span. It is home against Greenville (3-2, 1-0) next week.
Friday was the first-ever meeting between WC and Germantown.

“That was a big game against a good opponent,” Warren Central coach Josh Morgan said. “It’s a really big win for us. I’m proud of how our coaching staff and players responded. It sets up bigger games later on.”

Germantown (4-2, 0-1) took a 7-0 lead in the first half Friday, on a 3-yard run by Nick Barnes, but Warren Central answered with two touchdowns in the second quarter and never looked back.

Kivett scored on a 10-yard run, and then threw a 15-yard TD pass to Thomas following a Germantown fumble. The two touchdowns both came in the last two minutes of the half.
In the third quarter, the Vikings blew it open. Thompson scored on an 18-yard run, Malik Sims on a 5-yard run, and Thomas on a 30-yard run to make it 35-7.

Josh Griffin was a perfect 5-for-5 on PATs and Marvin Freeman had an interception early in the game for Warren Central.

Colton Gardner scored Germantown’s other touchdown, on a 1-yard run set up by an 79-yard run by Barnes down to the Warren Central 4-yard line with about six minutes left in the game.