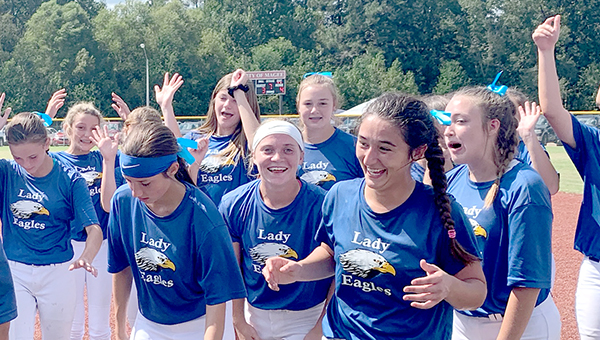 In the sixth inning Monday, after her team had let a lead slip away thanks to a couple of walks and an error, Porter’s Chapel Academy softball coach Chandler Ellis gathered everyone together and delivered a speech full of “tough love.”

PCA scored twice in the bottom of the sixth inning to regain the lead, then held on in the seventh to beat Glenbrook 4-3 in the winners’ bracket final of the MAIS Class 2A fast-pitch state tournament.

“I’m still trying to get my heart rate down. It was a close one,” Ellis said with a laugh. “A lot of them looked at me when it was over and laughed, and I said, ‘Really? Y’all are trying to give me a heart attack at 24.”

With the win, PCA (23-8) advanced to the best-of-three championship series later this week. Its opponent will once again be Glenbrook, which beat Centreville Academy 5-3 later Monday to advance out of the losers’ bracket of the double-elimination portion of the tournament.

The championship series begins Wednesday, with the winner of the losers’ bracket hosting Game 1. Game 2 and, if necessary, Game 3, will be in Vicksburg on Saturday. The times of all three games, and the site of Saturday’s games, have not yet been set.

What is set is that PCA is guaranteed its best finish ever in the state tournament. Its previous best was third place in 2004 and 2005.

The Lady Eagles increased their winning streak to 13 games, including a 7-0 mark in the postseason, although it was far from easy.

After blitzing Lee Academy (Ark.) 16-0 and Tunica Academy 8-2 on Saturday, the Lady Eagles struggled a bit against Glenbrook. They scored unearned runs in the first and second inning to take a 2-0 lead, and then settled in as pitcher Hannah Embry dominated.

Embry retired the first nine batters she faced and struck out 14 in the game. Alyssa Martin broke up the perfect game with a leadoff double in the fourth inning, and then scored on a single to cut it to 2-1.

Then in the sixth, the Apaches got to Embry again. A hit, an error and two walks — the second with the bases loaded — brought in the tying run. Embry escaped the jam with a pair of strikeouts, but it prompted Ellis’ speech.

“They were a better team than we’ve faced, but we went in thinking it was going to be a breeze,” Ellis said. “I went out there and told them that they seemed to think it was over, and that there was a lot of game left. Some tough love. It’s whoever fights the longest and wants it the most.”

Both teams fought to the end, but PCA had a little more in the tank.

Two errors in the bottom of the sixth inning brought in a run, and Meghan Hinson delivered an RBI single to put the Lady Eagles back in front 4-2.

Hinson had two of PCA’s four hits in the game.
Glenbrook made things interesting in the seventh. A one-out walk and a double by Martin put runners at second and third, and a dropped third strike allowed one of them to score and cut it to 4-3 with the tying run at third base.

Embry, though, struck out the next batter on three pitches to end the game and send the Lady Eagles to the state finals.

“We’ve just got to stay calm, relaxed, and keep on trucking,” Ellis said. “It’s not over yet.”