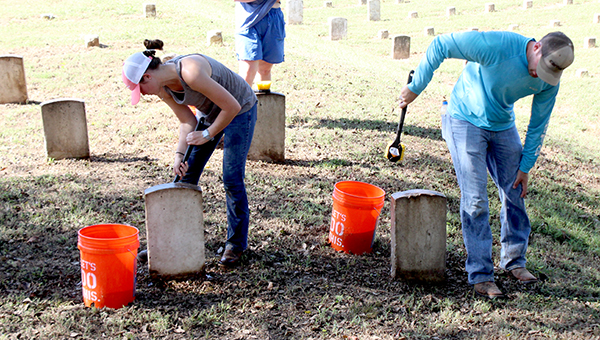 In the National Cemetery at the Vicksburg National Military Park, a team of local and AmeriCorps volunteers and members of Boy Scout Troop 7 were scrubbing grave markers.

At Fort Hill, members of Cub Scout Pack 193 and adult volunteers were painting the carriages of the cannons overlooking the Yazoo Diversion Canal.

About 60 people turned out to work at both sites as part of the park’s observance of National Public Lands Day, a national day to recognize the importance of America’s national park system by encouraging communities to participate in volunteer service projects.

“They got a lot of work done this weekend,” Bill Justice, Park superintendent, said. “We had several cannons painted, we had a crew that was down in the National Cemetery cleaning headstones; all those things helped a lot.

“The idea behind this is getting people who are active using the park, we’re also empowering them to promote the park and the NPS mission,” he said.

“It’s kind of like a neighborhood watch program; people are out there and communicating, but they’re also looking out for the safety of our visitors and reporting any maintenance issues. Kind of becoming the eyes and the ears of the park.”

Having the people out in the park sharing information with park officials, he said, “is really important.”

The park’s public lands program was conducted in partnership with the Friends of Vicksburg National Military Park and Campaign and Shape Up Vicksburg.

“This is great,” said Taylor Johnston, a scout with Troop 7 who was working with the Cub Scouts at Fort Hill. “We’re helping the community and the park so the rangers won’t have to come out and have to do this; it gives us a chance to help out.”

Steven Clement, another member of Troop 7, was cleaning markers in the cemetery.

“It’s fun. It’s relaxing and it gives me a chance to get out and help the park.”

“It gives them a chance to get out and recreate. They come from different areas of the community and they’re able to get together and learn about the Vicksburg National Military Park and be a part of something,” he said.

Timothy Gordon, a member of Pack 193, put it another way.

“It feels good and it’s fun,” he said, adding this was his first time participating in the program. “I’d like to do it again,” he said.

“The turnout was really great,” Rose Raines, volunteer coordinator for the park, said. “It’s absolutely inspiring seeing the community come together for a cause like this. I was kind of worried about the turnout with all the events going on, so I think we did pretty good.”

Kings Point Ferry back on the water after engine…