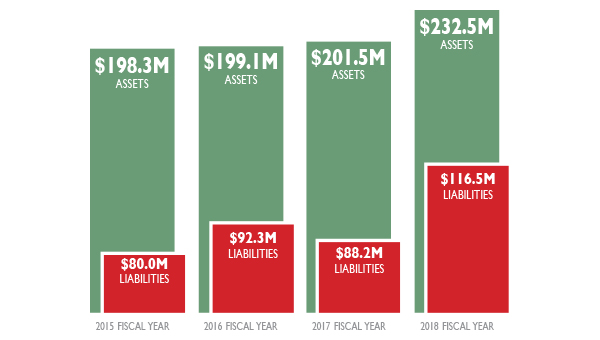 Above figures reported have been pulled from the previous audits. The city’s net worth is the difference between its reported assets and liabilities.

The city of Vicksburg is in a strong financial position, according to an audit report of its 2018 finances.

“The city has a net worth of $117 million,” auditor Booker T. Camper told the Board of Mayor and Aldermen Monday.

“We had a loss because of the pension expenses,” Camper said.

The city’s contribution for employees to the state Public Employees Retirement System increased during 2018, totaling $4.4 million.

The city’s current outstanding debt is $18.8 million, according to the audit report.

Mayor George Flaggs Jr. said one of the reasons the city’s finances have stayed strong is the “25 percent rule.” The board approved several years ago to have a 25 percent fund balance compared to operating revenue.

“It looks like those numbers (fund balance ratio) have exceeded 50 percent,” he said. “Any time you can operate a city of this size with 50 percent or money in our bank, it’s pretty good. There are a lot of cities out there that are in a lot of financial trouble.”

Having the extra money in the fund balance, Flaggs said, helps with the city’s credit rating.

It also means “you don’t have to hit the panic button” financially. It’s great news when you can take 25 percent of your check and put it in the bank,” he said.