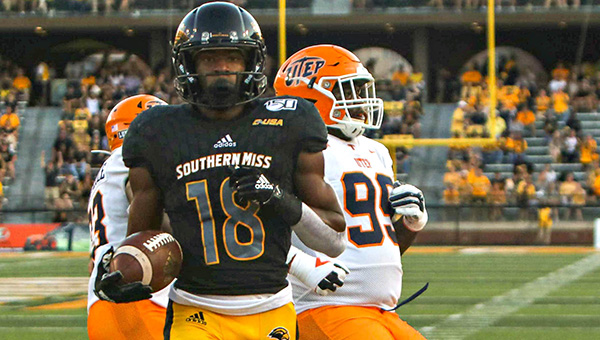 1
When he transitioned from high school to college football, it was unclear which position DeMichael Harris was best suited for. He had an outstanding high school career as a running back at St. Aloysius, but his elite sprinter’s speed and lack of size seemed to point him toward a future at wide receiver.

At long last, it seems he and the Southern Miss coaching staff have found the answer.
Harris had a breakout performance Saturday against UTEP, amassing 191 total yards and scoring two touchdowns in USM’s 31-13 victory. It was Harris’ fourth consecutive start at running back.

Through four games this season — he did not play in the opener against Alcorn State — Harris has 339 scrimmage yards and three touchdowns. He had 322 yards and three TDs all of last season, when he played all 11 games at receiver.

“DeMichael is a winner,” Southern Miss coach Jay Hopson said. “He’s a young man that comes to play every day at practice. He’s just one of those guys that’s going to give you everything he’s got.”

Harris scored the Golden Eagles’ only touchdown in a 49-7 loss to Alabama the week before, and then got them off to a fast start Saturday against UTEP.

On Southern Miss’ first possession of the game, he took a screen pass from quarterback Jack Abraham, turned it upfield and outran the defense for a 74-yard touchdown.

Following a blocked punt on UTEP’s next possession, Harris scored on a 2-yard run on second down to give USM a 14-0 lead 5 ½ minutes into the game.

Harris wound up with 11 carries for 66 yards and one touchdown, and two receptions for 80 yards and a touchdown. He also returned two kickoffs for a total of 49 yards.

“He’s made the offense that much more dynamic, having that speed back there,” Abraham said. “He’s a dynamic playmaker that can go out there and make plays at any given time. It gives us more options out of the backfield running routes and he can also get in there and run it up the middle, so it’s definitely a good thing.”

2
As it tried to rally from a 28-point deficit in the second half Friday against St. Aloysius, Copiah Academy abandoned its running game and went almost exclusively to the air. The decision led to one of the strangest scoring drives of the season.

The Colonels had a 16-play, 71-yard drive that only took 3 minutes and 12 seconds off the clock. It featured 11 passing plays and five runs, as well as another pass play that resulted in a pass interference penalty. Nearly every play stopped the clock, whether it was via incompletion or a receiver going out of bounds, and Copiah converted three fourth downs.

John David Weed finally finished it with a 2-yard touchdown run. Freshman quarterback Ben Adams was only 3-for-11 passing for 24 yards on the drive, but converted two fourth downs by running and another through the air.

The touchdown drive did not spark a comeback for the Colonels. They lost 35-7. It did, however, make the third quarter last nearly an hour.

“That was kind of weird, wasn’t it?” St. Al coach Michael Fields said. “You’re just wanting the ball, because it can be frustrating to an offense. But the kids kept their composure even after they scored, and we pulled it out.”

One player who didn’t seem to mind was St. Al quarterback Alvin Brown. He carried the ball 29 times for 206 yards and in the game, and also threw 12 passes. Brown did not play on defense.

“I got a break,” Brown said with a laugh.

Ole Miss did not pull off a stunning upset on its trip to No. 1 Alabama — it lost rather decisively, 59-31 — but did do something few teams have done in recent years by running the ball effectively against the Crimson Tide’s elite defense.

Ole Miss (2-3, 1-1 Southeastern Conference) finished with 279 rushing yards, the most Alabama has allowed since Georgia Southern gained 302 yards in 2011. Georgia Southern runs the triple option and only threw seven passes in that game. Ole Miss threw 30.

Alabama had been allowing 104.8 rushing yards per game this season. Its average jumped to 134.8 after Saturday’s game.

Ole Miss also took a 10-7 lead late in the first quarter that marked the first time this season that Alabama has trailed in a game. The Crimson Tide then scored 31 points in the second quarter to lead 38-10 at halftime. Wide receiver DeVonta Smith tied an SEC record with five touchdown receptions, all in the first half.

4
“Scorigami” is a term coined by author and blogger Jon Bois, that refers to scores that have never happened before in NFL history.

Sunday was a day full of Scorigami.

Two NFL scores — the Cleveland Browns’ 40-25 victory over the Baltimore Ravens, and the Tampa Bay Buccaneers’ 55-40 win over the Los Angeles Rams — were the first of their kind in the league’s 100-year history.

Oddly, the Rams have had a run of Scorigami games over the past two seasons. Their 54-51 win over Kansas City and 48-32 win against San Francisco in 2018 were also the first of their kind.

According to profootballreference.com there are now 1,437 possible scores ranging from a 2-2 tie up to a 70-70 tie that have never occurred. A total of 1,050 unique game scores have been recorded.