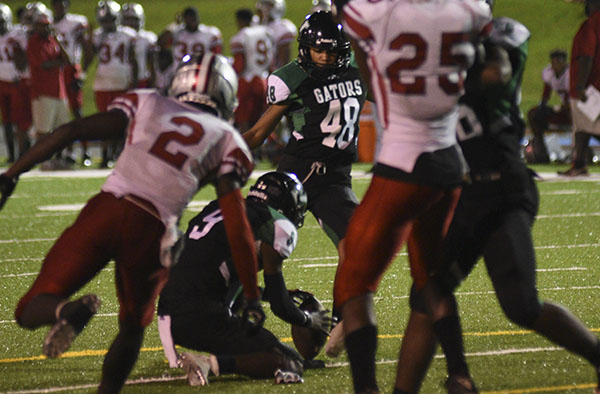 In its last two games, Vicksburg High has had a could’a and a should’a. Now they’d really like to skip the would’a and advance right to the did’a.

After two close losses, the Gators will go on the road Friday night to play Neshoba Central. They not only want a win to get things going in the right direction, but need one to avoid digging an even deeper hole in the Region 2-5A standings.

The two losses — 49-48 in overtime to Benton, La., and 27-19 to Provine last week — show the Gators can compete with good teams. Now they just need to prove they can beat them.

“At the end of the Benton game, there was this sense of, ‘We could’ve beat them.’ The big difference last week was it more of a disappointment in the air because we should’ve beaten them. We had them,” Vicksburg coach Tim Hughes said. “Either way, everything is on the table. We know how good we can be. There’s no excuses for anything.”

In their region opener against Provine, the Gators (1-4, 0-1 Region 2-5A) let a fourth-quarter lead slip away despite largely controlling the game. Provine only rushed for 72 yards and averaged 1.8 yards per carry, completed 7 of 15 passes and committed three turnovers.

Unfortunately, three of the passes were long touchdowns from Shavario Allen to all-state wide receiver Deion Smith, including an 85-yarder with about three minutes left that iced the game.

Smith finished with three receptions for 168 yards, and added another 151 yards on four kickoff returns. Provine also returned a fumble for a touchdown.

Hughes said it was a teachable moment for his defense about the perils of letting up for even a play or two.

“There was nothing they could establish on us. They just had a four-star wide receiver that’s 6-3, 6-4 and could run like a deer,” Hughes said. “You can have all 11 people not do what they’re supposed to do on multiple plays on offense and still end up having some success. It’s amazing how on defense, if all 11 people aren’t doing what they’re supposed to do, three plays out of 70 or 80 plays can bite you.”

Last season, Neshoba Central (2-3, 1-0) didn’t just bite the Gators, it chewed them up and spit them out. The Rockets had three players rush for more than 100 yards apiece, finished with 570 as a team, and only threw two passes — both for touchdowns — as they won 68-42.

This year’s Neshoba Central team is averaging about 10 passes per game, but still relies heavily on its rushing attack. It has gained more than 240 yards on the ground in three of its five games.

Neshoba is also on a roll, having won its last two games after an 0-3 start. Hughes said the Gators’ defense needs to be on point, but has improved on a lot of the things that allowed Neshoba to run wild against them last season.

“Last year Neshoba Central ran for a bunch on us. So did Germantown, so did Warren Central,” Hughes said. “We averaged between 30 and 40 missed tackles a game. Last week we had 10 missed tackles. The week before that it was 17 missed tackles. We were in a situation where we weren’t doing it in practice, the three or four games before we played Neshoba, or the four or five games after we played Neshoba. We’re a lot better at it now.”

Even though it’s early, getting a win Friday will be important to Vicksburg’s playoff hopes. Hughes said last week’s loss to undefeated Provine showed some of the parity in Region 2-5A, and that there is plenty of opportunity for even a 1-4 team like Vicksburg to turn things around.

“We’re sitting at 1-4, and we were right there with someone who’s now 6-0. It was a disappointing game because of that,” Hughes said. “But the good part is we played a 5-0 team and should have won. Don’t look over that fact. This is the first time in the last two years it was a ‘should’a.’ We should’ve won. It flips everything around. Now we’ve got to get better at finishing games, or finishing halves or finishing series. That’s our plans.”

ONLINE:
• For live updates and coverage on Friday night, follow us at vicksburgpost.com, facebook.com/thevicksburgpost, and twitter.com/vixpostsports