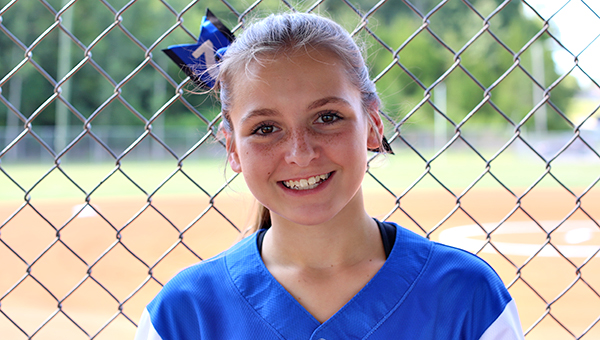 Porter’s Chapel Academy’s Katie Tillman singled and scored the team’s only run in an 11-1 loss to Glenbrook on Wednesday in Game 1 of the MAIS Class 2A softball championship series.

MINDEN, La. — To win its first softball state championship, Porter’s Chapel Academy will have to dig out of a mighty big hole.

Molly Fowler drove in four runs, including three with a first-inning double, as Glenbrook Academy beat Porter’s Chapel 11-1 in Game 1 of the MAIS Class 2A championship series on Wednesday.

Glenbrook snapped PCA’s 13-game winning streak and forced the Lady Eagles into a do-or-die situation in the best-of-three series. PCA (23-9) will need to win Games 2 and 3 on Saturday to win the state championship.

Saturday’s games will both be played at Hinds Community College in Raymond. Game 2 will begin at 11 a.m. and Game 3 will follow afterward, if necessary.

PCA beat Glenbrook 4-3 on Monday to advance out of the winners’ bracket in the state tournament and earn its spot in the championship series, while Glenbrook bounced back from that defeat to beat Centreville Academy in the losers’ bracket final.

PCA had won seven consecutive games and outscored its opponents 63-6 in the postseason, but ran into trouble early on Wednesday.

Fowler’s double was part of a big first inning that staked the Apaches to a 4-0 lead.
Fowler drove in another run with a groundout in the third inning as Glenbrook stretched its lead to 6-0. PCA got a run back in the fourth when Katie Tillman reached on an error and eventually stole home, but Glenbrook held the line and then scored five runs in the bottom of the sixth inning.

PCA committed six errors in the game that led to seven unearned runs. Starting pitcher Hannah Embry had been stellar to this point in the postseason, but allowed six runs — all unearned — on three hits and five walks in 4 1/3 innings.

For Glenbrook, Martin pitched six innings and allowed one unearned run, five hits and one walk. She struck out eight.